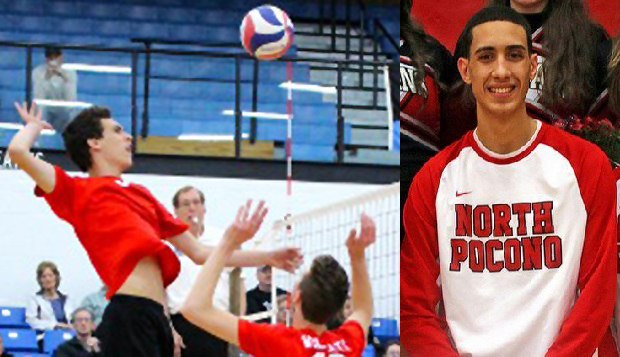 Joel Slaughter (left), from Ohio, and James Ildefonso, who competed in basketball, volleyball, and track and field in Pennsylvania, are two of the Flames' more promising recruits.

Entering the offseason, one of the areas of greatest need identified by Liberty University men's volleyball coach Bryan Rigg was the middle hitter position.

Two incoming recruits — James Ildefonso from northern Pennsylvania and Joel Slaughter from near Columbus, Ohio — will help address that need right away upon joining the Flames for the fall semester.

Both are tall and lean — Ildefonso stands 6 feet, 4 inches tall and weighs 165 pounds while Slaughter is 6-3, 150 — and are coming off successful seasons as seniors on their respective high school teams.

Slaughter, a homeschooler who plays middle hitter for Westerville South High School near Columbus, also has volleyball experience with Vanguard, an elite travel team in Ohio. He is one of six seniors at Westerville South, ranked sixth in the state, who will be playing in college this year.

The projected sport management major who also plays soccer and Ultimate, has already taken some online classes through Liberty and Ohio State.

A high jumper for North Pocono High School's track & field team and center on its basketball team, Ildefonso started playing volleyball as a sophomore and is now a team captain.

"James is still relatively new to the sport, but he is raw and freakishly athletic," Rigg said. "His vertical (leap) is probably around 35-36 inches. He has been leading his high school team the last two years and has a very high ceiling. James can be a big find for us, a physically dominant middle hitter if we can train him well."

Ildefonso, whose grandparents moved from Puerto Rico to New York before his family relocated to Pennsylvania, visited Liberty for College For A Weekend (CFAW) in the fall of his junior year.

"I just fell in love with it," he said. "That's when I met Coach Rigg and a lot of the players. It's going to be a whole different game for me, but I'm pretty excited and ready to go."

He plans to study in the School of Business and looks forward to growing spiritually and socially as well as academically and athletically.

"My whole family is Christian, but I want to get to know God more," said Ildefonso, who is a spiritual leader of his high school team. "I'm always smiling. When I'm happy and we're all doing our thing, we can be a very powerful team. When we're all down, it's easy to lose, so when someone's down, I try to pick them up.

"I hope to bring more energy on the court and off the court, coming off the bench, to get everyone positive and put some power into the offense and defense," he added.

Over the summer, Ildefonso plans to work on all aspects of his game to be ready to hit the ground running this fall.

"I know I can jump as high as anyone," he said. "I want to get my speed up and my hitting down as well as my passing and defense and overall coordination. I want to be confident in myself and to be at the top of my game for practicing and conditioning before volleyball starts."

Rigg will have some difficult decisions to make when it comes to determining his Division I and DII rosters this fall.

"It'll be interesting to see how it works out," Rigg said. "With the recruits we have coming in, it's going to be a good year next year and our 2018 recruiting class looks like it could be the best ever, so I'm excited. Competition breeds success and in the fall, they're going to fight for positions and the best guys, the most resilient guys are going to rise to the top."

The program as a whole has benefited from the 2015-16 addition of the DII squad, coached by Ryan Culkin, which prepares incoming freshmen to compete at the highest level as upperclassmen.

"Ryan does a great job with them and the fact that they're scrimmaging once a week against the DI team and playing the entire year, they're developing into more seasoned veterans who are more comfortable in the spotlight, and that's what we really want," Rigg said.

Similarly, those players who have crossed over to play beach volleyball in the offseason have returned to the indoor game with an advantage over their peers.

"Most of our guys are playing beach this year and if they play through the summer, they're going to be ready to go," Rigg said. "They're going to increase their vertical and get more touches on the ball."