Paintball Class A squad shot down by FAU in semifinals 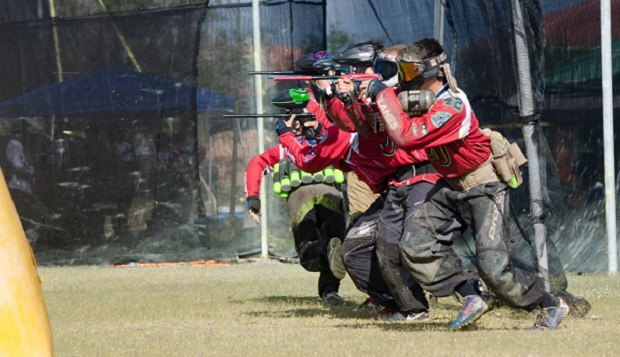 Liberty's Class A line breaks out in Saturday's first-round rout of Drexel. (Photo by Gabriella Naine)

Liberty University's Class A paintball team came out firing in Sunday's semifinal matchup against Florida Atlantic before missing the mark on the potential game-tying point as time expired in the National Collegiate Paintball Association (NCPA) Championships in Kissimmee, Fla.

The Owls, who won the NCPA championship in 2015 and finished fourth behind the Flames last year, rallied from a 2-0 deficit to advance to the final with a 4-3 victory.

"It was a tough fight," Liberty Head Coach Brian Davidson said. "They were a good team. We started out playing really strong, going up 2-0, and everything was looking good before they made some really good adjustments and started shutting down our center play."

Early in the second 10-minute half, Liberty senior Thomas Underman swapped out with an Owls shooter in the center W bunker before FAU's Thomas Ryan tied the match at 3-3 by advancing to the middle and taking out two Flames stationed behind their back two bunkers.

Underman was shot in the back on a sneak attack from the opposite side of the W bunker before FAU was assessed a major penalty, putting Liberty in a man-up situation. However, after he had served his time, that player came out of the box and fired on Flames freshman Kyle Babb before he could hit him, giving the Owls the game-winning point.

Liberty senior Micah McLeod, who had won a one-on-one battle with FAU's Corbin Robson to lift Liberty to a 2-0 advantage, was the Flames' last man standing. The Flames had an opportunity to tie the match and force overtime with a two-on-one advantage in the final two minutes, but FAU's lone survivor sniped Babb before McLeod ran out of paint in the one-on-one shootout. He grabbed the flag and recycled a few paintballs off the field before making a run for the goal, but was shot in the closing seconds of regulation just a few feet from his target.

"We had a two-on-one advantage and they just outplayed us," Davidson said. "There was a five-minute match point where we were trying to tie it up and win and we just couldn't come back."

It was the end of the road for the Flames and the last of two extremely competitive Class A semifinal matchups. Central Florida, which had eliminated Texas A&M on Saturday, survived and advanced past Temple, 8-7, in the first battle of the day, setting up an all-Sunshine State final, won by UCF, 7-5

Liberty's Class AA red team advanced past Texas Tech in Sunday morning's Ocho finals, 2-1, before being eliminated by the same score by Virginia Tech in the quarterfinal round. The Hokies went on to fall to South Florida in the championship match, 2-0.

"I'm really proud of all my guys and they all performed well above expectations," Davidson said. "We've seen the results every year and we've just got to keep up the hard work and the intensity and one of these days, we're going to win a national championship."

More importantly, the Flames exercised their faith and shared their testimonies with opposing players.

"I'm also proud of them as far as being a good example of Christ in this tournament," Davidson said. "We had some good conversations with Temple, sharing why we believe what we believe to get these guys to start thinking about Christ and eternity, and why it is so important. That's why we're here."