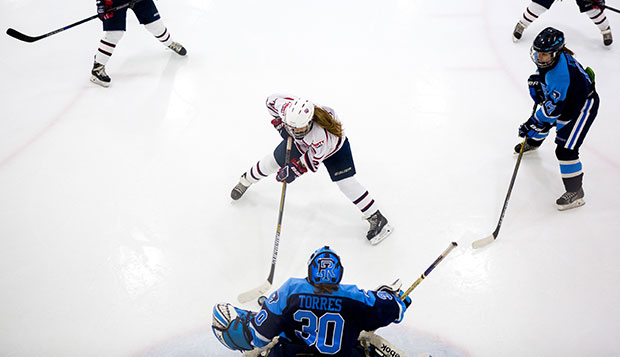 "Everyone just really stepped up this weekend," Liberty sophomore forward Lauren McDonald said. "Everyone played really well. All four of our forward lines, all three of our defense lines, and our goalie did amazing. So we had a really good weekend because of that."

The Lady Flames seized an early 1-0 edge when graduate forward Carrie Jickling, stationed in front of the cage, deflected a shot from the point off the stick of freshman defenseman Rachel Gibson past Rhode Island goalie Abigail Torres with 15:02 left in the first period.

Rhode Island struck back when Madison Balutowski sent an assist from the right endline to Janessa Courtney in front for a one-time finish past Liberty freshman goalie Nadia Rupoli, making her second straight start.

But Liberty retaliated to regain a 2-1 lead on a two-on-one break before intermission when Jickling threaded a backhanded cross-crease assist to freshman forward Vanessa DeMerchant where she jabbed the puck inside the left post with five minutes left in the opening stanza.

Liberty padded the lead to two goals just over two minutes into the second period when its top line worked the puck around the cage. Senior forward Courtney Gilmour sent the puck behind the net to fellow alternate captain Catharine Burrell, who wheeled and dealt a pass to Jickling in front for a backhanded finish.

Junior forward C.J. Tipping's fourth goal of the season extended the Lady Flames' lead to 4-1 after she launched a slap shot from the top of the left circle into the upper netting.

Monica Darby got one back for Rhode Island with 1:31 left in the period, unleashing a top-shelf score from inside the right circle for her 19th goal of the season, cutting the gap to 4-2.

That set the stage for a slugfest in the final stanza, when the Lady Rams outscored the Liberty, 4-3.

DeMerchant started the fireworks for the Lady Flames with a turnaround shot from the high slot inside the lower left post less than five minutes after the third-period faceoff. Darby responded by chasing down a loose puck down the center of the ice and sweeping it past Tipping and Rupoli with a backhanded spin move in the right crease, narrowing Liberty's lead to 5-3 with 13:25 to go.

Rhode Island's Samantha Evans made it a one-goal game by converting on a power-play with nine minutes to go. Her wrist shot from the right circle slipped past Rupoli's glove inside the right post.

Freshman forward Alex Smibert took matters into her own hands a few minutes later, capitalizing off a steal in the defensive end. She skated down the left wing, gaining momentum and regaining the puck from a Lady Rams defenseman before cutting back near the end line and tucking a backhanded shot inside the left post for a 6-4 advantage.

Rhode Island didn't concede defeat, however, battling back with a beautiful feed and finish from Evans in the left corner to Courtney in the left crease, where she batted the puck out of the air with a backhand inside the left post, trimming the deficit to 6-5 with 4:02 remaining in regulation.

Jickling completed her hat trick and appeared to ice the victory with 2:45 left when she received a spectacular cross-ice pass from Burrell and buried a wrist shot from in the right crease.

The Lady Rams made one final push to try to force overtime when Courtney's shot from along the left boards was chipped in by Brynne Costa for the final score with 31 seconds left. But that was all Rhode Island could manage before time expired.

Liberty will return to action this Thursday at 7 p.m. and Friday at 2 p.m. at the LaHaye Ice Center against top-ranked, defending ACHA DI national champion Miami of Ohio.