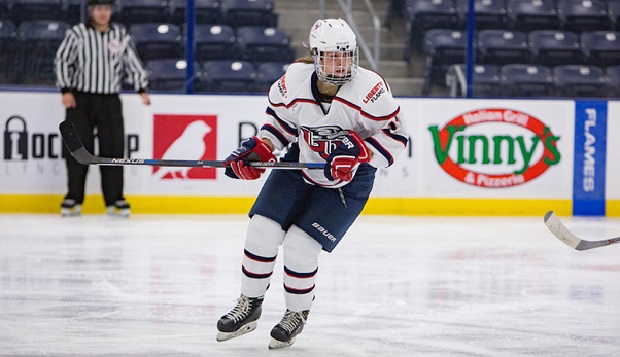 Freshman forward Deena Birney, who scored the second goal against Adrian, skates in a recent game at the LaHaye Ice Center.

A weekend sweep of top-ranked Adrian College, capped by Sunday's 2-0 triumph at Arrington Ice Arena, could boost Liberty University's ACHA Division I women's hockey team from fifth to first when the next computer rankings are released on Wednesday.

The Bulldogs (10-2) overtook defending ACHA DI national champion Miami of Ohio atop the poll by sweeping the RedHawks earlier this month.

"It was a good weekend," Lady Flames Head Coach Paul Bloomfield said after his team finished its third road trip of the semester at 3-0 to improve to 9-6-1. "We're probably a top-three team. We lost a few games we shouldn't have lost. Obviously, Davenport (on Friday) wasn't as competitive as this team, which is ranked No. 1. We had something to prove and the girls came through."

Liberty graduate forward and head captain Carrie Jickling netted the game's first goal unassisted on a breakaway with 8:27 left in the first period.

Just 1:40 into the second period, 18:20, freshman forward Deena Birney padded the lead assisted by sophomore forward Lauren McDonald and junior forward Chelsey Greenwood, who cycled the puck with the Lady Flames on the power play.

"The third period was scoreless, so they saved me the pain of going into overtime today," Bloomfield said, referring to Saturday's opener, when Liberty came from behind to win 2-1 in OT.

"Nadia did an outstanding job, a fantastic job in the net," Bloomfield said. "They came out with a vengeance in the third period, wanting to tie it up, and she stood on her head."

She had plenty of support from her defensemen in front of her, including junior C.J. Tipping, sophomore Katie Comeau, and freshman Rachel Gibson.

"Our defense is a lot of young girls and new freshmen, but we're coming along," Bloomfield said. "Tipping is our anchor back there. Katie Comeau is playing steady and I'm playing Rachel a lot because she's being dependable, and she's pretty tall."

Offensively, he noticed plenty of improvement in the Lady Flames' execution from their young lines.

"It's tough and it takes time when you get 12 new girls," Bloomfield said. "This whole weekend, the team really came together and worked well. They're finally starting to gel, working the lines together."

Bloomfield only traveled with four players on the bus ride back to Lynchburg, Va., as most of the rest of the team was picked up by family members to spend Liberty's Thanksgiving break at home.

The Lady Flames have only one more road trip, to Penn State on Jan. 27-28 before the ACHA National Championships in Columbus, Ohio, in mid-March.