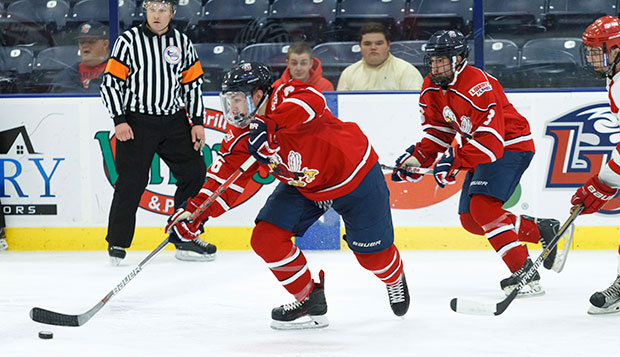 Liberty freshman forwards Josh Bergen and Josh Hamilton work the puck out of traffic in a recent home game.

Power play goals and penalty kills were the key to Liberty University's ACHA Division I men's hockey team's success in Friday night's opener against Oakland, a 3-1 triumph at the ONYX Ice Arena in Rochester, Mich.

"We scored two power-play goals tonight and on the penalty kill we killed off seven penalties," Flames Head Coach Kirk Handy said. "Our PK did the job tonight and Blake Scott played well for us in net. (Associate Coach) Jeff (Boettger has) been working hard with the PK and the guys are starting to respond. We played lots of different guys and the whole unit was effective tonight."

Freshman forward Quinn Ryan lifted Liberty to an early 1-0 advantage just two and a half minutes into the contest by sneaking a spectacular wraparound shot past Golden Grizzlies goalie Ian Dvorak off assists from sophomore defenseman Zane Schartz and sophomore forward Owen Harris.

Scott made a huge save in the closing seconds of Oakland's first power play to preserve the Flames' lead before junior forward Grant Garvin received a feed from freshman forward Garrett Nelson at mid-ice and skated into the offensive zone before rifling a shot past Dvorak top shelf for a 2-0 edge.

After killing penalties late in the first period and early in the second, Liberty went on a five-on-three power play and Schartz capitalized with an excellent shot from the perimeter unassisted to extend the lead to 3-0 more than halfway through the contest.

The Flames extinguished two more Golden Grizzlies power plays before Oakland finally ended Scott's shutout bid with 7:24 remaining in regulation. Liberty kept the pressure on Dvorak for much of the rest of the contest, especially on their sixth man advantage of the night, and emerged with the two-goal win.

Handy said there was plenty of room for improvement heading into Saturday's 6:30 p.m. rematch with the Golden Grizzlies back at ONYX.

"There were moments in the game where we can play better," he said. "We have to continue to refine our game and continue to eliminate parts of our game that aren't as effective as we want them to be, and eliminate a couple of those penalties as well. We've got to come back ready to execute at a higher level (Saturday)."