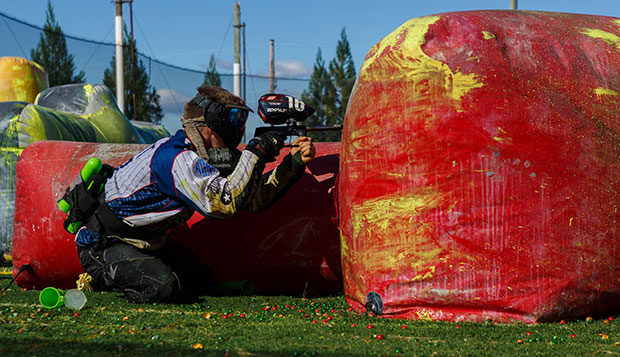 Liberty University's paintball team celebrated Homecoming Weekend by holding its only home tournament of the year — the five-team Mid-South Collegiate Conference (MSCC) Event No. 1 — Saturday on its East Campus fields and winning all three matches.

The Flames defeated Clemson, 5-1, East Carolina, 4-0, and North Carolina State, 8-5, with balanced production from their five gold line players and backup from their red and blue lines.

"It couldn't have gone any better," Liberty Head Coach Brian Davidson said, noting that his players "outperformed" their opponents.

In the final match of the day, the Flames won a back-and-forth shootout with North Carolina State, 8-5, scoring five points in a row to take command after trailing early, 2-1.

"They came out strong and we kind of underestimated them," Davidson said of the Wolfpack. "We would have lost in a Race-to-2 (format). They ran at us and we had to stop them. We just had to adjust our game plan, basically. They were coming up the center and shooting our center guy out a lot. We had to switch it up and figure out what worked."

Todd Hoglund, the Flames' founding head coach, came back to support Davidson and his staff while students and parents helped give the Flames a home-field advantage.

"The fans on hand definitely helped keep the guys calm and collected and helped encourage them," Davidson said.

"The word of the day was sacrifice," he said. "What would you be willing to sacrifice for your teammates? Your pride, your ego, that type of mentality."

He was pleased with the way Liberty responded, putting their teammates above themselves.

"All the players played really balanced and pretty well with each other," Reynolds said. "The communication was really good, and we even switched out some of our players and they performed well."

"Our line two guys stepped up when they needed to and held onto some points and held off some points," Liberty Assistant Coach Aaron Thompson said. "A big part of it was sideline coaching on the field and then teamwork, calling the plays and seeing where each team breaks out, where the other team is primarily going to be sending their players so we could adjust to that when they were winning points."

He said even when the Flames were down a man or two, they didn't surrender, but fought to the finish.

"Our guys did well adjusting in low-body situations," Thompson said. "We typically do a really good job of staying calm and marching up the field, playing more defensive and keeping the other team from running up and down the field."

Liberty, which debuted at No. 1 in the NCPA Class AA national rankings, will send all three of its lines to compete in the MSCC Class AA event No. 1, Nov. 12 in Rock Hill, S.C., before returning there to face the same four Class A squads they met Saturday in the second and third MSCC Class A events on Feb. 24-25.