No. 2 Lady Flames' rally thwarted by No. 6 Minutewomen 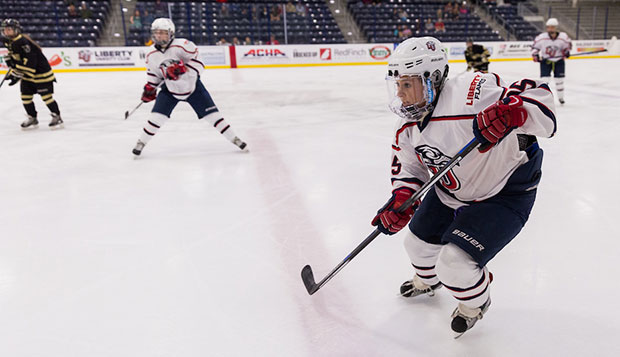 Liberty University's ACHA Division I women's hockey team rallied from a 3-0 deficit after the first period to tie Saturday's game with UMass at the end of the second at the Mullins Center. The Lady Flames, who debuted at No. 2 in the ACHA DI preseason rankings, seized a 4-3 lead early in the third only to give up the tying and game-winning goals to the No. 6 Minutewomen in the final 10 minutes of a 5-4 loss.

"It was a battle," Liberty Head Coach Paul Bloomfield said. "We missed a couple of key opportunities in the first period, and they capitalized. I don't know how many times we hit the post."

Both teams were coming off 11-1 victories the night before — UMass (4-0) over visiting Northeastern and Liberty at unranked Vermont, which it defeated by the same score in Thursday night's opener. The Minutewomen had outscored their first three opponents by a 27-2 margin.

The Lady Flames were recovering from a late night and limited sleep after arriving in Amherst after midnight and having to suit up for Saturday's 11 a.m. faceoff.

"They got a couple goals on us at the end of the third period that shouldn't have happened," Bloomfield said. "We pulled (sophomore goalie) Kelly Hutton out and put (freshman) Nadia (Rupoli) in after they scored to try to wake us up a little bit."

Liberty outshot UMass by a 48-32 count and Hutton and Rupoli combined for 27 saves.

"The two team were pretty even," Bloomfield said. "I knew they would be stronger than last year. They've obviously done some recruiting. Last year, their goaltending was weak. This year, it looks like they're going to be pretty decent across the plate. I still think we had the stronger team. We had lots of opportunities, but weren't able to put them in the net."

Senior forward Catharine Burrell cut the deficit to 3-1 just over three minutes into the second period, putting away assists from graduate forward Carrie Jickling and junior forward C.J. Tipping. Three freshman forwards accounted for Liberty's next two scores as Tiana Lisle made it a 3-2 game with an unassisted goal at the 10-minute mark before Vanessa DeMerchant netted the equalizer on a power-play goal assisted by Deena Birney.

Just over a minute into the third period, junior forward Chelsey Greenwood gave the Lady Flames their only lead of the contest, converting off passes from Birney and Tipping. However, UMass defenseman Tatum Schultz scored on a power play to tie it back up at 4-4 with 9:28 remaining in regulation and forward Joanna Olson netted the game's final goal just over three minutes later.

"UMass was good competition for us," Bloomfield said. "We're still working on our systems, and we have to learn from teams that are competitive that we can't take penalties. We've got to stay out of the box. They tied it in the third period on a power play goal."

The two teams will face off again in less than two weeks as Liberty hosts the Minutewomen twice over Homecoming Weekend on Oct. 21-22 in the LaHaye Ice Center. Next Friday and Saturday, the Lady Flames will welcome ninth-ranked Michigan at 6 p.m. both nights.