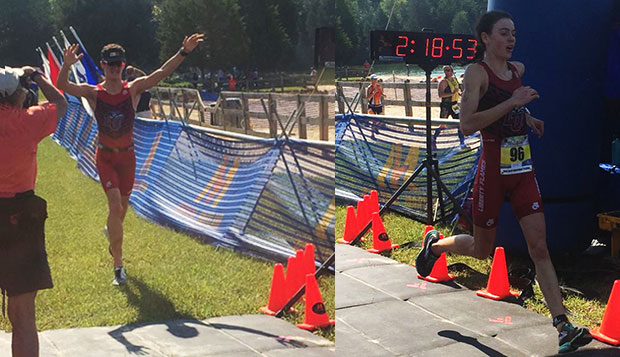 Merryman completed the women's race, which featured a 1.5-kilometer swim followed by a 42K cycling stage and 10K run, more than four minutes in front of Georgetown's Toria Sullivan in 2 hours, 17 minutes, 55 seconds. She posted the fastest women's run time (41:55), the second-fastest swim (23:39), and the third-fastest cycling stage (1:09:52).

In a 48-member field dominated by Navy, which placed eight women in the top 16, junior Madeline Griffin was the Lady Flames' second-highest place winner, finishing 28th in 2:56:14.

For Sonnery-Cottet, from France, it was his first international distance race. He finished nearly a minute in front of his closest competitor, Navy's Brian Primeaux, winning in 1:59:41. Sonnery had the second-fastest swim (18:45) and cycling (1:02:05) times and the third-fastest run (37:03) in the 51-racer field.

"We had many athletes finish their first Olympic-distance races today and others with personal best times," Liberty Head Coach Parker Spencer said. "Our team's hard work paid off well today and they are pumped and ready for the North Carolina Draft Legal and State Championship races next weekend (in Greensboro, N.C.)."