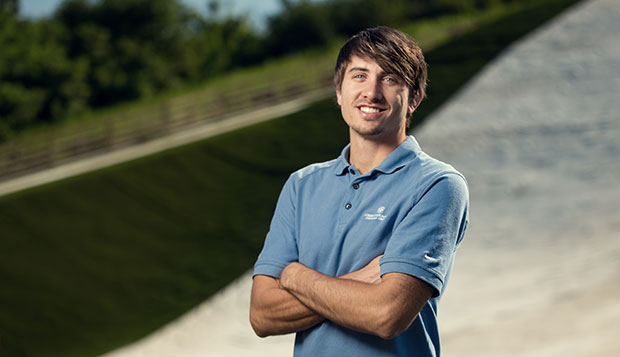 Ryan Leeds, who grew up as a downhill skier and eventually became captain of the Flames' snowboard team as a senior at Liberty in 2011-12, has high aspirations for Snowflex.

Illuminated at night, Liberty Mountain Snowflex Centre (LMSC) shines like a beacon of light attracting winter sports enthusiasts to Liberty University's sprawling campus in Lynchburg, Va., from around the world.

That's how new LMSC General Manager Ryan Leeds wants the facility — the only one of its kind in North America — to be viewed throughout the day and year-round, as a gathering place for those seeking outdoor adventure and excitement and spiritual refreshment and renewal.

"(LMSC) is still the only full-scale, year-round, dry-slope training facility in the United States," Leeds said. "We want people to experience the excitement of winter action sports and this is a great place to do it because it's year-round and unique, an environment that's unlike any other ski resort in the world. We are the largest Christian university in the world and we're the only ski resort located on a university campus, definitely at the scale we have to offer."

Leeds will also oversee the Liberty Mountain Skate Park (LMSP), the only indoor facility of its kind in Central Virginia. That park, located in the Candlers Station Shopping Center at the base of Liberty Mountain, is utilized by skiers and snowboarders as well as skateboarders during Liberty's increasingly popular Next Level overnight camps that Leeds has directed for the past three summers.

He hopes to elevate the visibility of the two facilities and continue to change the culture of the industry in accordance with Liberty's mission of Training Champions for Christ.

"When I accepted the (GM) job, I said my goal is to make sure we are meeting and exceeding industry expectations, which are to always increase student usage and bring awareness to the general public and to build a ski and snowboard culture in Lynchburg," Leeds said. "But we don't want this to be a place where it's just about numbers and just about revenue. We want it to be a place where people experience Jesus."

He said that is the original purpose for the establishment of the university and the foundation upon which he plans to build both LMSC and LMSP for the foreseeable future.

"We want the Gospel to be experienced at Snowflex through our lives and through our conversations with students, to be a place where they can come, rest, relax and have fun, but also to grow and develop as men and women and to be better prepared when they leave and wherever the Lord takes them on mission,"  Leeds said. "We want that for the Skate Park as well, for it to be a place where people can develop relationships with our staff that are not just surface-level, but meaningful."

Leeds, who received his undergraduate degree in Biblical Studies in 2012 and is working on his Master of Divinity degree, mentors staff members to become effective in both discipleship of students and as witnesses to the community at large.

"We want to make sure this is a place used as an encouragement to our customers, and that they will see that we as a staff have a hope in us that causes us to be different," he added. "We want people to walk away knowing that hope is caused by the Gospel."

As head coach of both Liberty's men's and women's ski & snowboard teams over the past three seasons, Leeds has instilled a spiritual emphasis and mission-minded focus in his riders, encouraging them to reach out to their competitors and event hosts and testify to their faith.

The Flames and Lady Flames have experienced success on the slopes in recent years, placing third in the men's snowboard Rail Jam and Slopestyle competitions at last season's United States Collegiate Ski & Snowboard Association (USCSA) National Championships and second in the 2014 Rail Jam held at Lake Placid, N.Y. In 2015, Liberty's women took third in the snowboard Rail Jam and Slopestyle events while the men finished third and fourth, respectively, at the 2015 USCSA Nationals in Bend, Ore.

Leeds said by landing on the podium at nationals, his teams have been given a more secure platform to talk about their Christian beliefs in a predominantly secular sport. He wants to continue to foster that environment at Snowflex, Liberty's year-round training base of operations.

With his added responsibilities as general manager, Leeds has designated second-year Assistant Coach Isaac Gibson — one of the Flames' top snowboarders as a senior in 2015 — as his successor as chapter leader for Skiers & Snowboarders for Christ at Snowflex, where Leeds will help facilitate the majority of the meetings in the lodge while Gibson plans and coordinates outreach events.

"We want Liberty students to be involved but we will also be going out into the community and bringing community members in," Leeds said. "We want to be a light to the community as well as a light on the hill, building relationships and serving people while reaching them with the Gospel."

The facility itself is continuing to improve, with the installation of Snowflex on a gravel area behind the drop-in to the jumps along the main slope, nearing completion.

"We'll be offering more square footage for people to ski on in the next couple weeks and eventually, we will look into different types of features we can add — man-made features, rails, or boxes," Leeds said. "We may possibly introduce bumps or mogul features under the Snowflex to give guests varying terrain, so it's not just all flat."

Leeds said the LMSC will again offer the "Trails to Rails" series, which introduces new snowboarders to the features at Snowflex, starting in early September with a competition scheduled in November.