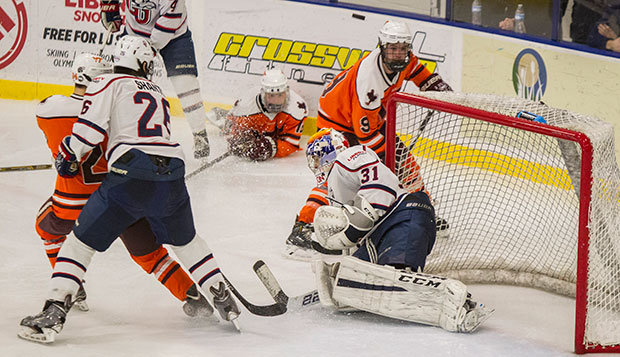 Cary Byron, shown making a save against Virginia Tech, went 15-9-3 in two seasons with Liberty's DI squad, with a goals-against average under 4.00 and a save percentage near 90.0.

Cary Byron, a graduate goalie on Liberty University's ACHA Division I men's hockey team this past season, has committed to play professionally with Viking HC in Hagfors, Sweden, starting this fall.

"It's a great opportunity for Cary and it's exciting for us to have another player go overseas and play professionally and see what he can do," Flames Head Coach Kirk Handy said.

He said Byron definitely deserves the opportunity and is confident he will make the most of it.

"Cary's a guy who's worked for everything he's got," Handy said. "He's played for the Division I, II, and III teams at Liberty and ended his career playing at the highest level, Division I. He's a guy who has gotten better every year and he hasn't hit his ceiling yet on his playing ability."

Byron was offered the opportunity from a European agent over the weekend while he was in Toronto visiting his family. He said the family of former DI and DII Flames forwards Brett and Jeff Boschman was very helpful in launching his professional career.

"I was fully prepared to try out for teams in the United States in August or September, but this opportunity came up pretty well out of nowhere," Byron said. "It was definitely a God thing."

He was inspired by another former teammate, Jackson Kuhn, who played a season in Finland before landing in Germany, where he signed a two-year contract extension this spring.

"Europe has always been on my mind, and speaking with Jackson and seeing the path he has taken, it has been a great motivation for myself and my journey," Byron said. "I think we share in an intense passion for the sport. He's a guy I look up to very much, someone who does it right every day. Those are things I try to focus on daily, and they are things I look to bring to Hagfors as well."

Byron doesn't know how many goalies he will be competing with for playing time, but said it will be an adjustment to play on Olympic-sized ice, which will give opposing forwards more time and space to be creative on attack.

"I signed a one-year contract so I am on the team, however nothing is ever promised," Byron said. "My dad always tells me, ‘You're always trying out,' so I plan on moving forward with that same mentality."

He hopes to assimilate quickly with the team, which ranges in age from 18 to 35, typical of a European squad.

"I hear they are a young team with guys that have been together for a few years now," Byron said. "They've gotten better every year and clearly have developed some nice chemistry."

He is most looking forward to experiencing the Scandinavian lifestyle, in a town of 12,000 located three hours from the capital city of Stockholm.

"The fans have been so nice and welcoming already and I haven't even stepped foot in Sweden," Byron said. "I'm very excited about being a part of their community and getting to know the people there and the culture. I want to get involved and I'm eager to make an impact in Hagfors, on and off the ice. God really has blessed me and I'm not taking this opportunity for granted. More than being successful in hockey, I hope to be a great witness in Sweden."

Before flying to Sweden in mid-August, Byron will spend the summer in Lynchburg, working with Assistant Coach Dan Berthiaume, who works with the Flames' goalies, Club Sports strength and conditioning coach Chris Kerr, and Club Sports athletic trainer Angie Witt.

"It's nice here because you have access to great facilities," Byron said. "I'm planning on working out and skating with other players here throughout the summer so I will be fully prepared for the upcoming season. The plan is to become more explosive and build on my quickness."