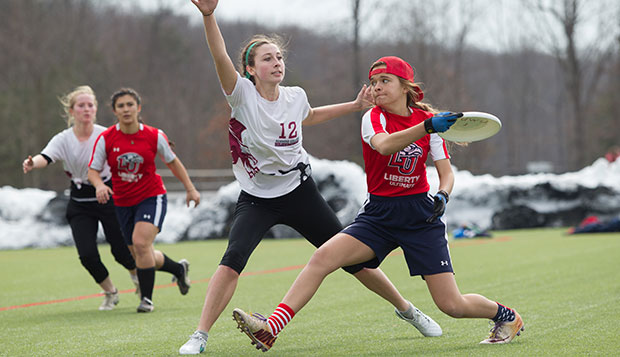 Liberty University's women's Ultimate team advanced to the April 30-May 1 Atlantic Coast Regional Tournament in Martinsville for the third year in a row with a fourth-place finish at this past weekend's Virginia Division I Conference Championships, hosted by James Madison University.

The Lady Flames went 4-3 on Saturday and Sunday, but were upset twice by JMU and East Carolina University and didn't play up to their No. 2 seeding.

"We qualified, but honestly didn't play as well as we had hoped," Liberty Head Coach Jonathan Mast said. "We struggled all weekend finding rhythm in our offense. A lot of the girls had great plays, but it was probably the sloppiest we've played all year. We have two weeks to prepare for regionals. It's good to have a little humility going in, a reality check, which makes us really motivated to work hard."

Facing the host Lady Dukes in the opener, the Lady Flames led 3-0 early before falling behind 7-6 by halftime. They scored the first three points of the second half to go up 9-7 before allowing JMU to score five of the last six goals in a 12-9 upset.

Liberty defeated Virginia Tech 13-5 before challenging No. 1-seeded Virginia, which hasn't lost a game at sectionals in five years and has won the past five regional tournaments in a row. The Lady Flames made the Cavaliers work for a 13-3 victory before concluding the first day of pool play with a 13-4 victory over William & Mary.

On Sunday, Virginia Commonwealth University dealt Liberty a 10-7 setback before the Lady Flames doubled up George Mason in the final round of pool play, 12-6. That sent Liberty to the fourth-place game, a rematch with the Patriots, which it won, 11-5.

Junior handler Jillianne Hook led the Lady Flames in both assists (19) and defensive knockdowns or blocks (22). She also scored a Callahan goal against Virginia Tech, blocking a pass out of the end zone and catching it for a point.

Graduate cutter and assistant captain Megan Kinne led Liberty with 14 goals while graduate handler Krista Johnson had the best tournament all-around, catching and throwing the disc more than any of her teammates. She ranked second with 16 defensive knockdowns, including an interception in her own end zone against VCU, and distributing 12 assists and scoring eight goals.

Mast believes the Lady Flames are one of four teams that can challenge UVa for the regional crown, along with UNC Chapel Hill, UNC Wilmington, and Maryland.

"We're excited to get a second chance," he said, noting eight out of 19 players on this year's team are graduating. "They've all come a really long way, seeing the team rise in the national rankings from 145 to 30 this year. We want to see all of them go out with a bang."