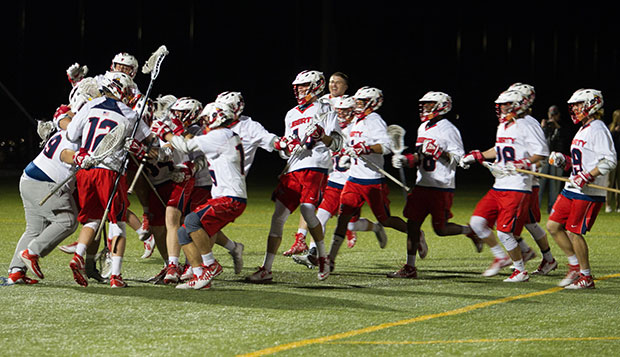 The victory clinched the second Northwest Region regular-season title in three years at the MCLA Division I level for the 17th-ranked Flames (8-3), who will receive the region's top seed going into next weekend's SELC Division I Championships near Atlanta. The 15-7 score was the same that Virginia Tech defeated the Flames by in last year's season-ending showdown in Blacksburg, Va., before going on to capture its second consecutive SELC tournament title and advancing to the MCLA DI Final Four.

"We remembered what they did to us last year and just wanted to pay them back on Senior Night," Liberty senior defender Brandt Grauss said. "That undefeated streak, that was special, something we were really fighting for, so it gave us that fire to pull it through. You love to protect your house and we've done that for four years and not many people can say that. So it feels good."

Grauss actually scored a critical goal, helping the Flames gain some much-needed separation on the 16th-ranked Hokies (8-5), who had trimmed a 7-3 second-quarter deficit to 7-6 early in the second half.

"We had a clear and they were substituting real quick and I saw the opportunity, saw the open field, and just ran it down, made a move on the defender and put it in," said Grauss, whose goal extended Liberty's lead to 9-6 . "That might have been my second goal here at Liberty so it was a good one to go out on. We turned the momentum a little bit with that play. It was a good run at a good time."

Miller then set up Gregory for a laser from the left wing into the side netting before Bernardo scored his last two goals back-to-back in a span of 18 seconds in the final two and a half minutes of the third to stretch the advantage to 12-6.

On the second, Bernardo received a pass from Miller in the middle before wrapping a behind-the-back shot past Virginia Tech goalie Reynolds Yarbrough.

Bernardo had ended a scoreless tie with a similarly emotionally uplifting score, driving from the top of the box through traffic, making an athletic move and rifling a tricky bounce shot past Yarbrough exactly five minutes after the opening faceoff. The Flames built their lead to 5-1 early in the second quarter when Gregory fed Miller behind the cage where he cut along the left end line before depositing a low bounce shot into the back of the net.

Meanwhile, on the defensive end, the Flames stifled the Hokies' attack for much of the night, with freshman goalie Matt Nichols coming up with a number of clutch saves.

"Defense stepped it up when we needed to," Grauss said. "We were prepared coming in, so we just executed what we knew to do. We knew they were going to be dodging through the midfield a lot, so we made sure we had the first slide and the second slide up quick. We knew that when they were isolating at X, they were looking for feeds up top, so we made sure to zone off the top and take care of business up there.

"(Nichols) played a heckuva game," he added. "He killed it out there and he just did exactly what we asked of him. He was stopping those outside shots and just got some really good looks out there."

Senior midfielder Bryce Mrakovich and sophomore attack Nick Lombardozzi each tallied a goal and an assist and junior middie Chad Moore netted a goal three minutes after the Hokies made it a 7-6 contest.

Grauss expects the Flames to use this regular-season-ending win as a springboard into the postseason.

"We're looking to take this feeling and carry it through the SELC (tournament)," he said. "Hopefully, we'll see them again and the outcome will be similar. We'll play every game like it's our last, and at this point it is."

"They're the defending champions so we knew coming out winning the game was important, but to have the score come out the way that it was and for us to play as well as we did kind of makes a statement that we're going to be a threat going into the playoffs," he said. "It's a good win to reward the guys and to send them off as undefeated at home for four years. We're pretty psyched about it. The only way we control our own destiny is to win that championship. That's our goal and that continues, it's not going to change." 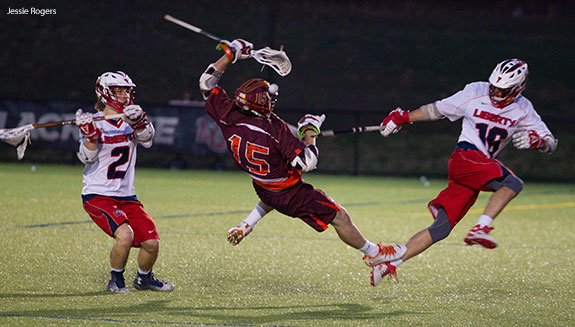