Flames hold off Bobcats in first of three games in Florida 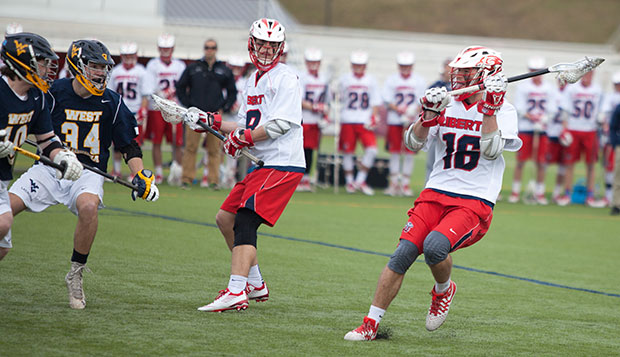 Liberty sophomore attack Nick Lombardozzi, shown setting up the offense in a March 5 win over West Virginia, and the rest of the Flames will take on host Florida State in the second game of their spring break road trip at 7 p.m. Thursday.

At least on the scoreboard, Liberty University's men's lacrosse team, ranked No. 19 in the MCLA Division I poll, began its second road trip of the season on a much better note than it did its first — with a 9-6 victory over No. 20 Texas State, Tuesday night in Tallahassee, Fla.

The Flames (4-2), who lost their first two games to No. 12-ranked Boston College, 12-11, and No. 6 host Georgia Tech, 15-7, Feb. 20-21 in Atlanta, got a season-high five-goal outburst from freshman attack Sam Gregory and overcame two third-quarter deficits to pull away in the fourth quarter.

"That was huge for us," Liberty Head Coach Kyle McQuillan said. "Sam Gregory's a guy that stepped up for us, especially when it mattered most."

He said the defense, anchored by junior Max Fontaine and senior Brandt Grauss, kept the Flames in the game win the first half, which ended with Liberty clinging to a 3-1 advantage.

"In the first half, our defense played phenomenal, even though we didn't put them in good situations, spending a lot of time in the penalty box," McQuillan said. "They gave our offense enough time to finally find our mojo in the fourth quarter. That's a testament to our defense to play as well as they did to allow our offense time to wake up."

On the field, McQuillan said there were a lot of similarities between Tuesday night's game and the season-opening loss to the Eagles, even though Liberty outshot Texas State by a commanding 38-16 margin.

"For our first game on spring break, it definitely wasn't to the level of what we wanted to play," he said. "There were a lot of things we did poorly and reverted back to things we did in the Boston College game. We spent a lot of time in the penalty box and we still had a lot of good scoring opportunities, but, even though we knew their goalie was susceptible low, we continued to shoot high or right at the goalie's stick. We can't play the way we did tonight and expect to win against Florida State."

Liberty put its defenders' backs against the wall by committing eight penalties on the night.

"When we were playing six on six, they only scored one or two goals against us," McQuillan said. "We have to do a better job of being disciplined. We cannot afford to play undisciplined lacrosse."

Besides Gregory, who scored three of his team's first four goals in the fourth quarter and added an assist, Liberty relied on two goals and two assists from senior attack Ryan Miller, who had two of the Flames' first three goals, one goal and one assist from senior middie Brett Bernardo, and a goal by junior middie Chad Moore that extended their lead to 9-5 with 2 minutes, 55 seconds remaining in regulation.

In the faceoff department, Flames senior Charles Fianko won 10 of 15 attempts and in net, freshman Matt Nichols made 10 saves for a 62.5 save percentage.

"It was a pretty decent night for him," McQuillan said. "Late in the game, he bailed us out a few times, making some great saves to give our offense an opportunity to get a lead and protect that lead."

Liberty got an early scouting report on its next opponent, host Florida State, which routed Texas State by a 15-4 final on Monday night. The Flames' game against the Seminoles has been rescheduled back to Thursday at 7 p.m. before Friday's final against South Florida is also set for 7 p.m.