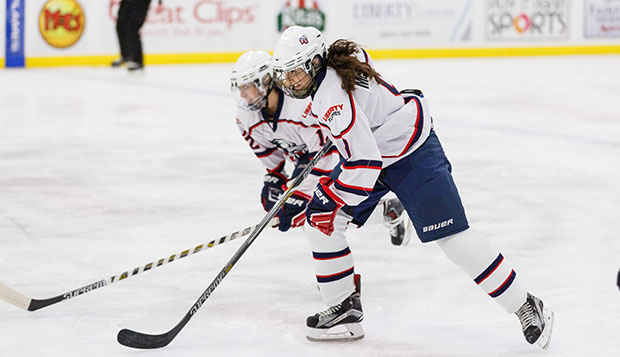 Graduate forward Nikki McCombe scored the equalizer on a sharp-angled shot with 6:07 remaining in regulation.

The rematch of last year's ACHA Division I women's hockey national championship game between top-seeded defending champion Liberty University and second-seeded Miami of Ohio more than lived up to its expectations, Saturday afternoon at Wings Arena in Kalamazoo, Mich.

Overtime was required to decide the winner after three periods of furious action between two teams playing their fourth game in as many days. Miami came out swarming Liberty's net, looking to return to the title match for the third straight season after winning it all in 2014. The RedHawks staged the upset with less than two minutes left in the 20-minute extra period when Kaley Mooney, who netted the game's first goal in the first period, ended it with a spectacular one-on-three shot across the body into the top left corner of the cage for a 3-2 final.

"We had a tough first period, but the girls were battling back and kept going and going," Liberty Head Coach Paul Bloomfield said. "We controlled most of the last two minutes of the third period and most of the overtime. It was a good goal, right up in the top shelf. Nobody did anything wrong. We had too many penalties today, but we played tough."

The semifinal battle had a distinctly championship feel to it. Second-ranked Miami (24-5-1) boasted the best defense in the ACHA and the fourth most productive offense behind UMass, Rhode Island, and Liberty (23-4-1). The RedHawks outscored opponents by a 124-36 margin this season while the top-ranked Lady Flames were nearly as dominant with a 138-45 scoring advantage.

Liberty struggled to work the puck out of its defensive end for much of the first period but Lady Flames freshman goalie Kelly Hutton (29 saves) was up to the challenge, making several key saves including a backhanded glove save of a breakaway opportunity by Rachel Booth.

With the RedHawks on the power play, they ended the scoreless tie with 2:36 left in the period when Ireland Mooney sent a pass to Booth in the right circle for a shot blocked by Hutton, but Kaley Mooney put away the puck, in the left side of the goalmouth, for a 1-0 lead.

Freshman forward Lauren McDonald had a couple shorthanded breakaway chances for Liberty in the second period, but had her backhander blocked by Miami goalie Emalee Wills at the right post on the second. Hutton made an even more dramatic glove save of a point-blank shot by RedHawks forward Katie Baldwin off a crossing feed from Jordan Hanson to keep it a 1-0 deficit at the end of the second.

Midway through the third, Hanson appeared to put the game away with a shorthanded score after stealing the puck from McDonald along the back left boards and finishing a perfectly executed wraparound past Hutton from the right post for a 2-0 advantage with 9:38 remaining in regulation.

However, with Liberty still on the power play, it struck back just 16 seconds later when Chelsey Greenwood deflected in fellow sophomore forward C.J. Tipping's shot from the high slot, trimming the RedHawks' lead to 2-1.

Lady Flames graduate Nikki McCombe, the only current player not returning for next season, sniped the equalizer with 6:07 left in the third with a beautiful sharp-angled shot from the left wing into the top right corner of the net, over Wills' left shoulder.

Both teams traded penalty kills at the end of the third period and opening minute of overtime. McDonald created a scoring chance for Liberty late in the OT before Miami went back on attack, with Caroline Noble and Kaley Mooney working tic-tac-toe passes in front of the Lady Flames' net only to have Hutton showcase her quick reflexes with the blocker, denying Noble's shot in the left crease.

Hutton blocked Hanson's shot with her left pad before Kaley Mooney got the game-winning chance after taking a poked pass from defenseman Jessica Gould and skating across the blue line. She cut to the right past a poke check by Liberty senior forward Carrie Jickling and lifted her shot over Tipping and past the end of Hutton's stick into the top left corner.

The RedHawks advance to their third consecutive final and will meet the winner of Saturday's second semifinal between third-seeded Grand Valley and fourth-seeded Adrian, two teams they lost to this year.

The Lady Flames, who reached their fourth consecutive Final Four after placing second, third, and first the past three seasons, respectively, will not play in the third-place game as that contest was eliminated from the tournament last year. They can look forward to making their ninth trip to nationals in the 11 years Liberty has had a program next season, with a strong returning core of players and a deep and talented incoming class of recruits added to the mix.

"We have huge hearts on our team, and players who don't do it for the glory," Bloomfield said. "It's been a great year." 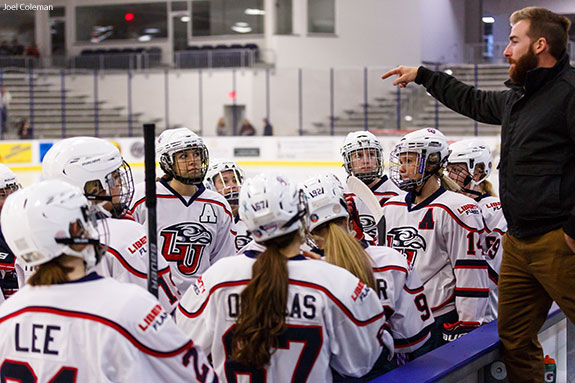 Assistant Coach Justin Forth addresses the Lady Flames from the bench in a recent home game.