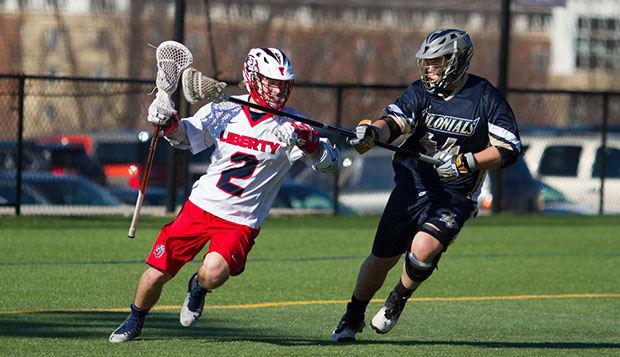 Staying focused on the prize enabled Liberty University's men's lacrosse team to rebound from last weekend's back-to-back losses to teams ranked ahead of it in the MCLA Division I poll and dominate SELC Northwest Region rival George Washington, 16-2, Saturday afternoon at the Liberty Lacrosse Field.

"We just kept a level head the whole time," Flames senior midfielder Brett Bernardo said. "We knew coming into here we had to earn what we had lost this past weekend. Obviously, down in Atlanta, that wasn't what we wanted, so we were fired up, we were motivated, we were ready to go coming into here and you can see the outcome."

Liberty (1-2, which dropped one spot to No. 17 in the MCLA DI rankings) extended its home winning streak to 19 games dating back to the 2012 season and improved to 1-0 in SELC Northwest Region play.

"Playing GW's always important because these are the games that matter and the ones that get you in the playoffs," Flames Head Coach Kyle McQuillan said. "We're one step closer to that now and that's our ultimate goal this year, to win an SELC Championship."

"Overall, it was really well balanced," Bernardo said. "We were able to move the ball really well. That was really the success for our offense this game, being aware of who was open. They were pretty much leaving the back side open, so we were able to push in and find those open guys and everybody was able to contribute. Everybody across the board stepped up today so it was a good win."

The Flames platooned freshmen Matt Nichols and Brayden Harriman in goal, with Nichols allowing two goals in the first half and Harriman posting a shutout in the second.

"Our defense played very well," Bernardo said. "We were working through a lot, just getting a lot of communication in there. Both freshmen goalies are stepping up huge for us."

Nichols started a Liberty fast break in the second quarter by sending a long outlet pass to senior midfielder Bryce Mrakovich who took the ball across midfield and found Lombardozzi wide open deep in the box for a score on a bounce shot that stretched the lead to 7-2.

Miller set Lombardozzi up for another easy finish and a shot rifled into the upper netting in the final two minutes of the first half as the Flames took a commanding 10-2 advantage into the break.

Bernardo scored the only goal of the third quarter on a perimeter shot off Miller's assist from behind the cage. Then in the fourth, Bernardo and Miller ripped the upper netting with outside shots before Miller struck again from a sharp angle on the left side 37 seconds later to extend Liberty's lead to 13-2.

Senior midfielder Charles Fianko set the tone for the Flames by winning 12 of 16 faceoffs to give them a near three-to-one advantage in time of possession for the contest.

"It's what we needed to be able to do coming off of the rough start last weekend," McQuillan said. "Not just a win was needed, but a pretty convincing one. I told the team before the game we're too good not to be great and this was an opportunity to at least take a step in the right direction. I don't think we have arrived as a lacrosse team. There were still a lot of things that I could see from the sidelines that need to be fixed. But we took some big steps closer to the team we need to be come the end of April."

The Flames, who only play five games at the Liberty Lacrosse Field this season, return home to face West Virginia, another Northwest Region opponent, next Saturday at 2 p.m.

"Regardless of who we're playing, we've just got to be consistent," McQuillan said. "If we come out and play the way we did today, we'll have some more success next weekend."