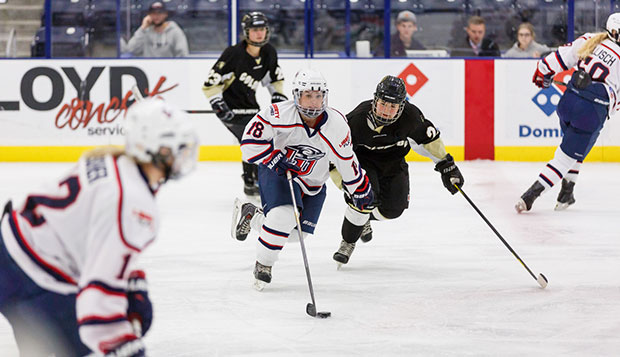 In its first game since Nov. 22, Liberty University's ACHA Division I women's hockey team showed early signs of rust before sharpening their skates in a 7-1 victory over a very competitive Colorado squad, late Thursday night at the LaHaye Ice Center.

The defending ACHA DI national champion Lady Flames (8-2-1), ranked No. 1 in the first two ACHA DI polls, netted single goals in the first two periods before exploding for five more in the third, and sophomore goalie Rosie Kelly was just over three minutes shy of shutting out Colorado (9-5) despite consistent pressure by the No. 13 Buffaloes' attack.

"They've got 12 freshmen," Flames Head Coach Paul Bloomfield said. "They were scrappy and we were rusty. They played with us the first period. By the third period, we were back in our game."

"It's been a while since we've been on the ice, but I think we came out pretty strong," senior forward Catherine Burrell said. "We definitely came out ready to play. The third period is definitely the strongest period that we have. It was good that we stepped up to the plate and showed them what we've got."

Burrell started the scoring less than four minutes after the opening faceoff, taking a short feed from fellow senior forward Carrie Jickling in the left crease and lifting a shot from a tough angle top shelf past Buffaloes goalie Natalie Warnes, who entered the game with a 1.00 goals-against average, 92.5 save percentage, and four shutouts.

Freshman forward Lauren McDonald extended the Lady Flames' lead to 2-0 with a spectacular shorthanded score with 6:49 left in the second. She chased down a lead pass from graduate defenseman Madison Fischer — set up by graduate forward Nikki McCombe — and snuck the puck past Warnes by cutting to the right crease and lifting a backhanded shot top shelf.

"She's a firecracker," Bloomfield said of McDonald. "She's just fast. She's very competitive. She likes to dig. She's quick. She intercepted a pass and took off with it."

Burrell opened the floodgates for the Lady Flames seven seconds after the third-period faceoff, off another assist from Jickling, beating Warnes from the right crease.

"We tried something a little different there and it worked," Bloomfield said. "Special teams stuff is good when you get to try those things once in a while."

McDonald finished a fast-break outlet from junior forward Nicole Douglas with another nice move a top-shelf shot, this time from the left side, for a 4-0 advantage with 11:24 remaining.

"Mac's a fast skater and she's got good hands so she definitely helps us up front, with her speed and her talent," Burrell said. "She's got all the good qualities of a good hockey player. She's very versatile."

Freshman forward Lauren Pillisch made it 5-0 less than a minute and a half later in the right crease, one-timing freshman defenseman Kjristin Hobert's assist from the right endline.

Buffaloes center Alexandra Mohr ended Kelly's shutout bid by jamming in an assist from Leila Nichols with 3:06 to go. But Liberty responded quickly with two more scores in the ensuing minute — the first by Jickling on a left-handed wrist shot into the upper netting and last by sophomore forward Chelsey Greenwood, top shelf from the left crease, finishing feeds from Burrell and Jickling.

"The first and third were our best periods," Burrell said, noting four Buffaloes power plays kept the Flames on the defensive in the second period. "It's kind of hard to play when you're penalty killing, but all three lines worked their hardest. They skated their hardest and we worked together as a team once we got the rust off our skates after the first."

Liberty will get another shot at Colorado on Friday at 8 p.m. in the LaHaye Ice Center before hosting No. 15 Penn State, Sunday at 10 a.m. Those will be the Lady Flames' last games before the third ACHA DI rankings come out next week.