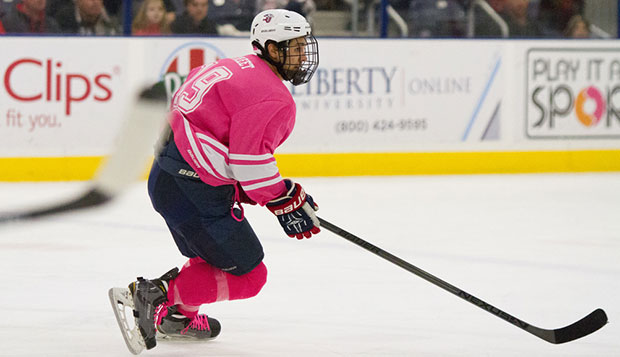 Liberty University's ACHA Division I men's hockey team showed its compassionate side on Friday night at the LaHaye Ice Center, sporting bubble gum pink jerseys for their first game against Rutgers before auctioning them off to raise support for the American Cancer Society's Hockey Fights Cancer drive.

"I was proud of our effort tonight and the exciting part is I know we've got more in there than we showed even tonight," Liberty Head Coach Kirk Handy said. "It was encouraging to see glimpses of what we've worked hard for all year."

Liberty outshot Rutgers by a 40-27 count, reaching that mark for the third straight game and only the third time all season.

"We've been working on shooting the puck a lot more, generating more opportunities to put the puck in the net," Flames senior forward Tyson Street said.

Less than a minute after the opening faceoff, after a near miss by Flames freshman forward Owen Harris, Street scored the game's opening goal from the left wing off an assist from senior defenseman Kyle Miller.

"It felt great, first shot, first shift and it went in," Street said. "That's a rare opportunity, a rare moment. I was pumped up and the boys were as well."

The goal, which lifted Liberty to an early 1-0 lead, was particularly special for Street, whose mother, Laurie, is in remission from her bout with breast cancer diagnosed when he was a young teenager growing up in British Columbia, Canada.

"I just remembered the whole time I was going to play for my mom," Street said. "I hope she was watching. She's down in North Carolina, the Charlotte area now, and she watches online when she can. She just made me stronger to realize you can overcome anything if you believe in it and get people around you supporting you."

Street had plenty of support on the ice throughout the night, with key contributions from veteran and freshmen teammates alike.

"It was such a great team effort, especially coming off two wins up in Michigan," he said. "We've got a lot of freshmen and they're starting to chip in in a lot of different ways and stepping up. I'm really impressed with their play and they're obviously just going to get better and better every game."

Four minutes into the contest, Liberty graduate goalie Cary Byron was taken out by an Ice Knights forward skating behind the net, putting the Flames on a power play for goalie interference. The Flames failed to capitalize, but Byron proved he was no worse off after the illegal hit, showcasing his quick reaction skills by making a glove save of a point-blank shot in the left crease on Rutgers' first real offensive threat.

Then, after a hooking call to Ice Knights forward Jake Pyhel gave the Flames another man advantage, junior Chase Harris put away the rebound of a shot by Street from along the left boards at the far post, stretching the lead to 2-0 with 10:53 left in the first period.

Byron, who won his third straight start in net following a sweep of Oakland, made another great glove save from the opposite side and smothered an Ice Knights chance in front before defenseman Brenden Siegel put Rutgers on the scoreboard with an unassisted shot from the high slot off the faceoff with 4:33 left.

After a scoreless second period, Liberty added three more goals in rapid succession midway through the third to take complete control. The Flames killed a penalty to start the period and went on attack right after that, starting with fast-break chances by senior forward Danny Logan and Roberts.

"There were contributions up and down the lineup," Handy said. "I thought the line of (Ray) Wilson, (Jeff) Wilson, and (Eric) Masters, all freshmen, in that third period had some great shifts, drew a lot of penalties for us, worked hard, were strong for us tonight."

Flames leading scorer Grant Garvin started a fast break with a quick outlet pass to fellow junior forward Robert Ward, who skated the puck down the middle of the ice before making a swift move between the circles and finishing with a beautiful shot into the upper netting, extending Liberty's lead to 4-1 with 12:51 remaining in regulation.

Just 25 seconds later, after a near miss by Garvin left of the cage, Ward replicated the feat from near the same spot, finishing a wrist shot top shelf off assists from Garvin and sophomore forward Paul Lamoureux.

"Ward is a clutch player for us," Handy said. "He's always a catalyst, that's for sure."

Six minutes later, with 6:36 to go, Chase Harris netted his second power-play goal, sneaking his shot from the top of the right circle through Marsillo into the back of the net, assisted by Ward and Logan.

The two teams meet again Saturday at LaHaye when the puck drops at 7 p.m.

"We're going to celebrate, but in the locker room we'll focus on what we're going to do (Saturday) and put this game behind us," Street said. "Winning's such a habit. It's becoming more and more consistent now and we just want to keep it rolling." 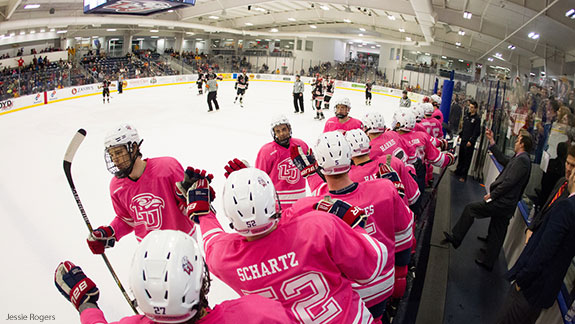