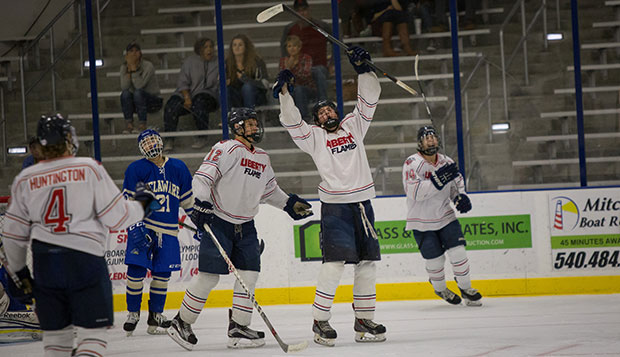 Junior forward Ben Freymond celebrates one of his two goals on the night with Liberty linemates Devon Docksteader (left) and Paul Ingles.

Sophomore goalie Connor Carew, the Mid-Atlantic Collegiate Hockey (MACH) Goalie of the Month for October, stopped 28 shots to notch his first shutout of the year and Liberty University's ACHA Division II men's hockey team improved to 11-0 with a 3-0 victory over Delaware, Friday night at the LaHaye Ice Center.

"That's incredible to have your goalies post back-to-back shutouts," Liberty Assistant Coach Mike Morrison said, noting freshman Blake Scott blanked Rider for his first shutout last Saturday. "It takes a whole team to get a shutout, not just a goalie. (Junior defensemen Daniel) Huntington and Ryan Sidun had a great game tonight. They played patient, played the angles really well, and just contained and kept them out of our zone and made sure they didn't put any pucks in the net."

The Flames, ranked No. 1 in the first ACHA DII Southeast Region poll, had to come from behind to beat the Blue Hens 5-2 on their home ice on Oct. 23, but took control of the rematch with their eighth-ranked regional rivals from the start.

"DJ made a great pass, (junior forward Jordan) Barstead created some space, and then Kaz was able to find the back of the net," Morrison said.

Junior forward Ben Freymond scored the Flames' second goal midway through the first period and their third less than four minutes into the second, finishing a feed from senior forward and head captain Paul Ingles.

"Our guys are just buying into the system and they're playing hard," Morrison said. "All three lines were doing their roles. We had our top two lines score goals and then our third line shut down their top line, which is exactly what you want, no goals against."

He was equally pleased with the defensive performance of his third line, which protected Carew and helped spark the Flames' transition game.

The defensive corps did an exceptional job of neutralizing Nate Marks, the Blue Hens' most dangerous scoring threat, and keeping them off the scoreboard.

Morrison hopes the shutout trend, which now spans seven periods, can continue Saturday at 2 p.m. at LaHaye against seventh-ranked UMBC.

"We're looking to just take it shift-by-shift and game-by-game," Morrison said. "We can't overlook UMBC because we've had a rivalry with them and been back and forth with them. It's important for us to be on our A game."