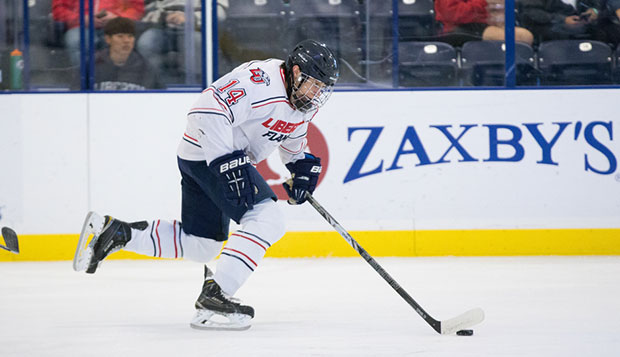 Liberty senior forward and head captain Paul Ingles scored his first hat trick of the season to help the Flames improve to 10-0.

A week after rallying from a 2-0 deficit to upend Rider on the road, 7-4, Liberty University's ACHA Division II men's hockey team jumped out to an early lead with three goals in the final 10 minutes of the first period and rode away from the Broncs, 7-0, Saturday afternoon at the LaHaye Ice Center.

"We kind of took control here early," Flames Head Coach Chris Lowes said. "We're comfortable playing in our rink and that showed this weekend and today we were able to impose our will a little bit."

"Paul's our leader," graduate forward Ryan Kerr said. "He's the hardest working kid I've ever played with and he's the most dedicated captain I've ever met. He's doing a very good job and it finally paid off for him."

Ingles later stretched Liberty's advantage to 5-0 with the first two goals of the second period, assisted by sophomore defenseman Sean Bakker and Freymond at the 15:21 mark and Docksteader and sophomore forward Tim Bierema at 8:24.

"He just had one of those games," Lowes said. "He hasn't put a lot of pucks in the net this year, but he's always a workhorse and when he's not (scoring), his linemates are, so it's nice to see him get rewarded for the work he puts in and to see that line rolling."

"It's nice to come out of the gates flying," Ingles added. "We've struggled a little bit in the first period, coming out a little flat, so we were excited to score early and often. We're building good chemistry."

Graduate forward Christian Garland scored the Flames' second goal of the first period off assists from Freymond and junior defenseman Ryan Sidun before Freymond finished feeds from Sidun and Ingles on a power play 51 seconds before the first intermission.

Junior forward Jordan Barstead extended Liberty's lead to 6-0 with 7:09 left in the second period off assists from junior defenseman Daniel Huntington and senior forward and alternate captain Peter Kazmierczak. Finally, with 7:22 left in the third, Kerr took a pass dug out of the corner by Bierema and capped the scoring from deep in the left circle off Garland's secondary assist.

"We got goals from all three lines today and that's been kind of the theme," Lowes said. "The other thing we're real happy about as coaches is our PK (penalty kill) has not allowed a goal in at least five games."

Freshman goalie Blake Scott got his second straight win against two teams likely to be ranked in the top 10 when the first ACHA DII rankings are released next week.

"It was a great weekend for Blake Scott," Lowes said. "His performance (in Friday's 3-1 win over Penn State) was maybe even better than today, but it was his first shutout, so that's a big moment for him. He's gaining confidence, as coaches we're gaining trust in him, and his teammates are really starting to rely on him."

Kerr credits both Scott and the Flames' defense on the penalty kill.

"That's been huge for us," he said. "We've got about three or four good units we can go to — (senior forwards Eric) Burke or (Jeremy) Miller or Garland or Timmy (Bierema), everyone. It's been fun. It's been a blast."

Liberty returns to LaHaye on Friday at 9:45 p.m. to host Delaware — a team it rallied from behind to defeat on the road 5-2 on Oct. 23 — and Saturday at 2 p.m. to entertain UMBC before traveling to challenge Florida Gulf Coast University, the top-ranked team in the Southeast Region the past two seasons, Nov. 13-14.