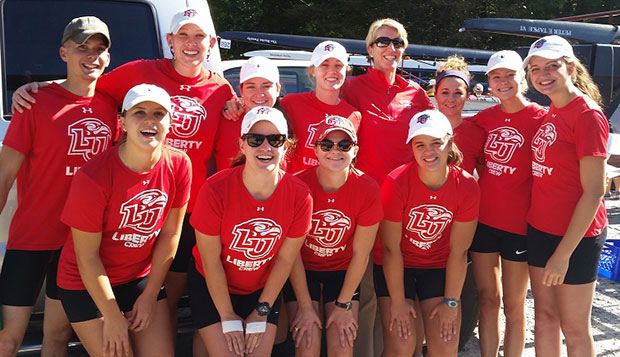 Liberty University's two women's crew boats placed eighth and 11th, respectively, out of 17 entries in the open women's four race of Saturday's Occoquan Chase regatta, held on a tributary to the Potomac River near Woodbridge, Va.

"I was very proud of them and pleased with the results," Lady Flames first-year Head Coach Debbie Prowse said. "There were four UNC-Chapel Hill boats in our race and they are an NCAA Division I program and they did really well. Having them finish ahead of us was to be expected and I think we did pretty well otherwise."

Liberty's A boat, featuring senior Trevor Ellingson at coxswain, sophomore Kendra Dowdy in the stoke seat, junior Kathleen Lopp in the three seat, sophomore Allie Coughlan in the two seat, and senior Rachel Williams in the bow seat, crossed the finish line of the 5,000-meter race in 21 minutes, 30.75 seconds, more than 30 seconds in front of a boat from Virginia Tech.

The Lady Flames' B crew — coxed by sophomore Lydia Miller with junior Caitlyn Parr in the stoke seat, sophomore Sarah Catto in the three seat, freshman Moriah List in the two seat, and sophomore Mary Beth Klein in the bow — came in at 22:46.84, just over five seconds ahead of a second skull from Washington College.

"Our B boat was two lengths behind (Washington) during most of the race and went on a 20-stroke burn at the end and they beat them right at the finish line, so that was super exciting," Prowse said.

Though rain was in the forecast, the conditions were ideal for racing, with sunny skies, mild temperatures, and few ripples on the water.

"It was gorgeous on Saturday, perfect all day long," Prowse said. "You couldn't ask for a better day to row."

She would like to give more of her rowers a chance to compete at their next regatta, the Secret City Head Race in Oak Ridge, Tenn., set for Oct. 24.

"For this race and those two boats, I was only able to take the top eight rowers and one alternate," Prowse said.

"I'm hoping our next race we'll get everybody a chance to row by entering a couple more races than we did Saturday. We're going to have an opportunity to race our (women's varsity) eight and then our two (women's varsity) fours."