Lady Flames showcase stamina in sweep of No. 5 Rams 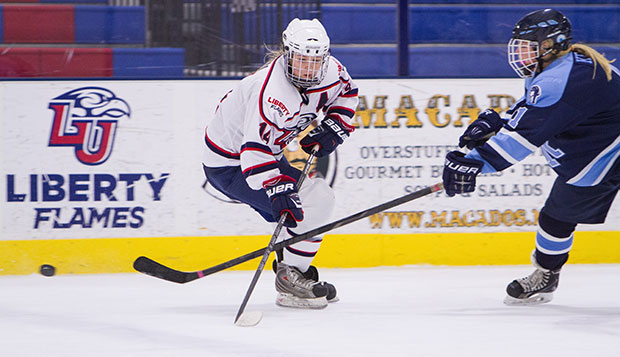 Liberty University's ACHA Division I women's hockey team demonstrated the level of conditioning that will be required for it to have a shot at defending its national championship this weekend, with a two-game sweep of Rhode Island at Brad Boss Ice Arena.

Playing their third game on the road in four days, the second-ranked Lady Flames (3-1-1) prevailed 3-2 on Saturday night and 5-1 on Sunday morning despite playing with a roster of just 12 players, compared to 21 for the fifth-ranked Rams (3-3).

"We have a few bruises and bumps, but everybody kept rolling," Liberty Head Coach Paul Bloomfield said. "It's still early in our season, but our conditioning was good."

Liberty was outshot 34-24 on Saturday night, when it opened a 3-0 advantage after the first period and held off a Rams' comeback bid.

Freshman forward Lauren McDonald finished a feed from Greenwood for Liberty's final score with 1:17 left in the opening stanza.

Sophomore goalie Rosie Kelly made 32 saves to post the win, allowing only two second-period goals — by sophomore forward Janessa Courtney on a wide-open shot after a defensive breakdown less than four minutes in and senior defenseman Sydney Collins with just under four minutes to go.

Liberty turned the tables on Rhode Island in the shot department for Sunday's second game, outshooting the Rams 36-23. The Lady Flames got goals from five different players, sparked by senior forward and alternate captain Catherine Burrell, who scored on a power play off an assist from freshman defenseman Kjristin Hoberg just over two minutes into the action.

Just 30 seconds before the first intermission, freshman wing Lauren Pillisch netted her first goal in a Liberty uniform from just outside the crease off a pass from behind the net from Greenwood, making it 2-0.

Rhode Island cut the deficit in half early in the second period when freshman forward Monica Darby scored shorthanded. But the Lady Flames countered with two goals in a span of 43 seconds less than 10 minutes later — by Jickling off an assist from Burrell and Tipping unassisted — to stretch their lead to 4-1 with 10:45 to play in the second period.

After a Rams player was assessed a 10-minute penalty late in the third period, Greenwood capped the scoring with 5:19 to go by finishing feeds from Burrell and Hoberg on the power play.

"It was a good game to watch, with a lot of battles both ways," Bloomfield said of Sunday's rematch. "Both teams put in a lot of hard work. They're stronger than last year and did have a full bench, so it was good to play them."

Next weekend, the Lady Flames will play four games against non-ACHA teams in a period of three days at a tournament in Charlotte, N.C., before hosting Vermont in its home openers at the recently renovated LaHaye Ice Center over Homecoming Weekend, Oct. 23-24.