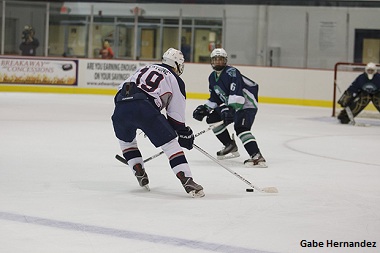 The Flames got rolling as DJ Dinnison, one of 14 freshmen on the roster, scored midway through the first period, taking a rebound from the left circle and beating Whalers goalie Christopher Diaz.

Senior Brad Docksteader came in six minutes later and scored on a power play to increase the lead to 2-0. Docksteader scored again just a minute later on a pass from Peter Kazmierczak to put Liberty up 3-0.

Caleb Allison pounded a rebound home late in the first and the Flames entered the first intermission up 4-0.

Liberty did not take long to increase their lead as Dinnison blasted one home from the point just 83 seconds into the second to put the Flames up 5-0. Senior Neal Henderson took a pass from Allison and added his first on the night to increase the margin to 6-0, before Trent Carter finally got the Whalers on board with about two minutes to go, making it 6-1 Liberty.

Henderson scored two minutes into the third on a scrum in front to put Liberty up 7-1. Docksteader completed a hat trick midway through the final period off a rebound from Allison and Kazmierczak closed out the night scoring off an assist from Clinton Nigh on a rush with five minutes to go.

Freshman Nick Devine got the start in the net for Liberty, and did not allow a goal in a period and a half of work to pick up the win. Sophomore Cary Byron finished the night as Head Coach Chris Lowes split the time evenly between the two underclassmen.

Liberty,  now 1-0 on the season,  will conclude the season-opening doubleheader with the Junior B Whalers at 6:15 p.m. Saturday.