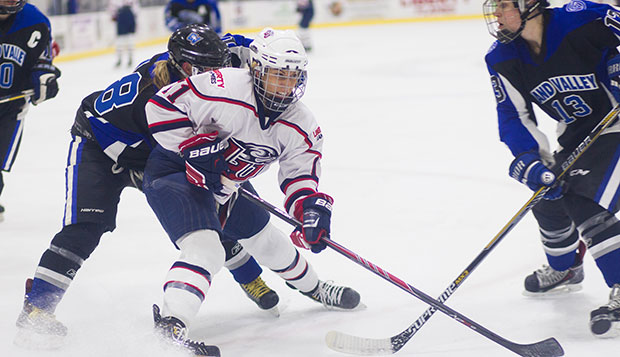 Stevenson, who graduated in May with a degree in Criminal Justice and a minor in Psychology, still has a month left in her summer position as a marine assistant with the Ontario Provincial Police aboard a boat in the Georgian Bay.

"I wasn't expecting it," Stevenson said, noting Lady Flames Assistant Coach Jonathan Chung convinced her to register for the CWHL draft at the beginning of summer in May. "I forgot about it and (Sunday), when I was working, I saw on my break that I had a bunch of Twitter notifications and that's how I found out I got drafted. I'm really excited."

Stevenson, a forward who ranked fifth in ACHA Division I last season with 49 points (16 goals, 33 assists), was selected 17th overall, ahead of a number of NCAA Division I players from around the United States.

"It's definitely something I never thought I would be doing four years ago, graduating and potentially playing professional hockey," Stevenson said. "It is an awesome experience if it works out, and it's crazy to think I'll have an opportunity to do that."

Stevenson's work schedule didn't offer her the flexibility to travel to tryout camps for the new National Women's Hockey League (NWHL), as former Liberty teammate Chantal Lischynski did twice over the summer. She believes the CWHL, with four of its five teams based in Canada, is a better fit, especially with the Furies located in her hometown of Toronto.

The league's other four teams are the Brampton Thunder, located just an hour's drive north of Toronto, the defending Clarkson Cup champion Boston Blades, the Montreal Stars, and Calgary Inferno.

"It's nice to come to an established league," Stevenson said. "It's the same caliber as the NWHL, which has more American teams. Both leagues are filled with Olympic level hockey players."

She will report to Toronto's training camp in early October before the Furies, who won the Clarkson Cup in 2014, open regular-season play later that month at the Mastercard Centre in Toronto.

Stevenson hopes to be able to juggle her responsibilities as a player in the league and a cadet in the police force, her projected career field.

"If decide to do it, it will have to be a full-time thing," Stevenson said. "It's a big commitment with a couple practices a week and lots of traveling. I will still go forward with my plans of becoming a police officer."