Childress to succeed Wilson as Tae Kwon Do Head Coach 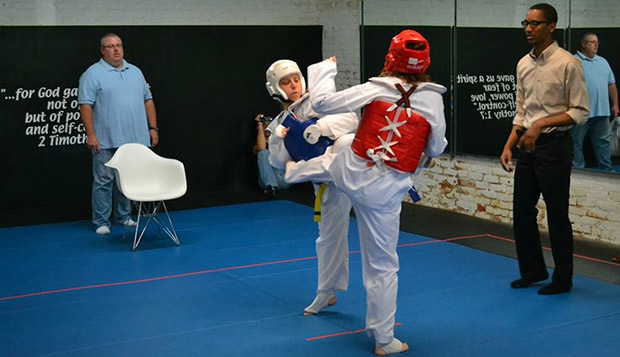 When Jesse Wilson, who started Liberty University's Tae Kwon Do team in the fall of 2012, stepped down this past spring before being named Club Sports Coach of the Year, it was only fitting that Tom Childress, his assistant on staff for the past three seasons, agreed to take his place.

"I'm very interested in keeping the program going," Childress said. "I had stepped up when Coach Wilson stepped down for health reasons after having two back surgeries and applied for the position and went through the interview process then."

He has witnessed tremendous growth in the program since it started,

"In three years, Tae Kwon Do went from being a very new Club Sport to last year when we produced two national champions," Childress said. "I'd like to see that continue and keep moving forward. One of our national winners, Tykeyah Henderson, was only a freshman who came to us with very little prior experience, so I'm looking forward to seeing how far she can go."

Childress, who works on the security force at Babcock & Wilcox, has been practicing martial arts for 31 years. He earned black sashes in two styles of kung fu back in the late 1980s and was just promoted to black belt in Tae Kwon Do this past April after training under Wilson for the past three years. In addition to kung fu, he has trained extensively in Shotokan ryu, American freestyle karate, boxing, and competed regionally as well as nationally as both an under-belt and black belt.

"There's no one else I would recommend for that position," said former Flames Assistant Instructor Brian Preiser, who stepped down in December. "His strength is his diversity. He has trained in a lot of different styles of martial arts and he brought a whole different viewpoint to the team."

Childress has served as a police officer for the past 23 years and most recently as a defensive tactics instructor at the Central Virginia Criminal Justice Academy. He has assisted Wilson in conducting several self-defense seminars at Liberty and area high schools in recent years and plans to continue to lead those this coming school year.

"That's going to be a very big part of our program going forward," Childress said. "We wholeheartedly believe that is part of our mission."

He would like to see the program continue to expand so Liberty can eventually contend for a national championship as a team.

"The way Tae Kwon Do nationals work, it's based on cumulative points," Childress said. "We sent eight competitors and had five medalists, including two gold, but we were still not close to being considered for a team championship. Most of the top teams have 25-30 active competitors at nationals, so we have to grow our numbers and improve our skill levels."