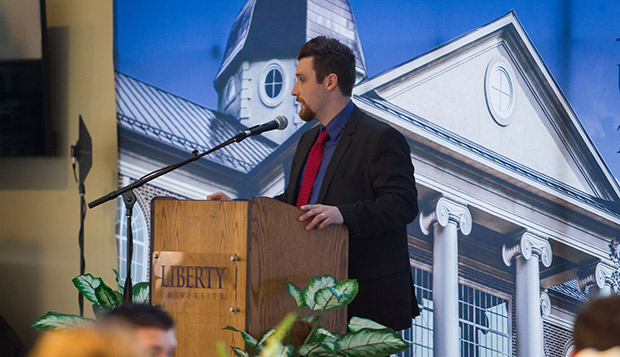 Just 14 months after it was founded, the Liberty University Varsity Club eclipsed the 1,000-member mark this past week, including a nearly even number of student-athlete alumni and graduating seniors from Liberty's 20 NCAA Division I and 33 Club Sports programs.

Josh Zealand, a former track and field and cross country runner for the Flames and current director of business intelligence in Liberty's Information Technology Department, was recognized as the 1,000th member to join.

"The hardest part was getting it up and off the ground," said Jake Hannon, director of the Varsity Club and also an assistant coach of the Flames' ACHA Division I men's hockey team. "Last year at this time, we had between 50 and 100 members as we were starting to pioneer the club itself. Now we're focusing more on serving the member population."

Created to connect or maintain relationships between athletes and to help them stay involved at Liberty while enjoying member benefits, the Varsity Club complements the Flames Club, the primary fund-raising organization for the Athletics department.

"We're just beginning to tap into the potential here," said Bob Good, director of Athletics development and the Flames Club. "There's tremendous future opportunity for growth in these organizations. We're just getting started. There's no conflict, just a cooperative spirit at work, and no competition because we're all working toward the same overall goal of advancing the institution and reaching out to alumni and all constituents."

Tyler Falwell, Liberty's director of Alumni Relations, appreciates the initiative Hannon has shown in getting the Varsity Club up and running, and is excited to see the momentum build and benefit other alumni support organizations on campus.

"As our alumni base is expanding, and becomes more and more diversified, any time we are better at reaching and connecting with alumni in a more personal way is definitely important for alumni relations," Falwell said. "We're thankful for Jake and all of his efforts, because it's been a need, and it's good to see that need being met. It's an excellent start."

Besides setting up activities and tents at home football games at Williams Stadium,  providing a place for former athletes to reconnect, Varsity Club festivities will also take place prior to select ice hockey games, including a tailgate event scheduled for the re-opening of the remodeled LaHaye Ice Center on Oct. 23.

"A lot of it has spread through word of mouth as people sign up and are excited to get their former teammates to sign up as well," Hannon said.

He is also excited about the development of a new website exclusively for Varsity Club members.

"It will be a lot more interactive, allowing members on social media pages to sign in and keep everyone connected," he said.

That site will also serve as a key recruiting tool; Hannon estimates the current 1,000 members is  just 15 percent of the total Liberty alumni who spent a year or more on NCAA or Club Sports teams during their careers on campus.