Flames' gold line fifth in Class A, blue in AA round of 16 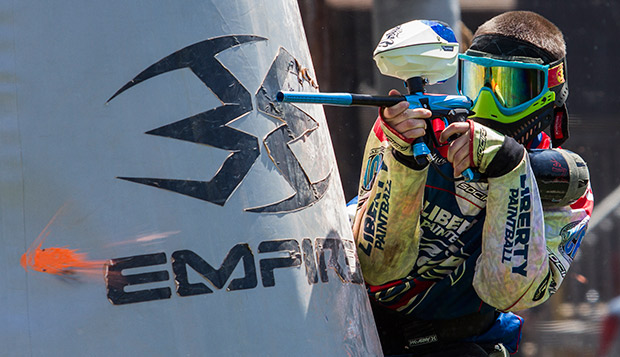 Neither heat, humidity, or top-caliber competition could keep Liberty University's Class A paintball team from going 3-0 in preliminary play and advancing through to the quarterfinals of the National Collegiate Paintball Association championships, Friday in Lakeland, Fla.

"We were definitely communicating really well as a team and our athleticism and endurance paid off," Liberty Head Coach Brian Davidson said.

Saturday was a different story, however, as the Flames were burned by Florida Atlantic, falling by a 10-3 count to settle for fifth place out of 20 teams.

"It just wasn't our day," Davidson said. "They were just on a hot streak and we couldn't stop them."

In pool play, Liberty scored a 6-4 win over Kennesaw State, a team that had beaten Florida Atlantic 9-3, before also defeating Temple, 4-2, and Northeastern, 6-4, to received a bye through to the quarterfinals.

Libery's blue line advanced through preliminary play with a 3-1 record in RaceTo-2 five-man play, shutting out Rowan, Georgia State, and Texas A&M, and losing only to Emory & Riddle by the same 2-0 score. Surviving through a field that started with 50 teams, the Flames will face Texas Tech in the round of 16 on Sunday at 9:30 a.m.

Liberty's white line was eliminated after going 0-4 on Saturday in the toughest bracket of the Class AA tournament, losing by 2-0 scores to Alabama, North Texas, and High Point as well as Wisconsin-Stout by a 2-1 count.

Win or lose, Davidson was proud of the way the team performed and served as witnesses to others.

"Nationals is definitely a good time and the team grows closer together," he said, noting the players prayed before every match. "We're here not just to win, but to represent Christ and tell people about Him."

Check out the complete scoreboard and event schedule online.