No. 16 Flames take No. 8 Wildcats to OT before losing opener 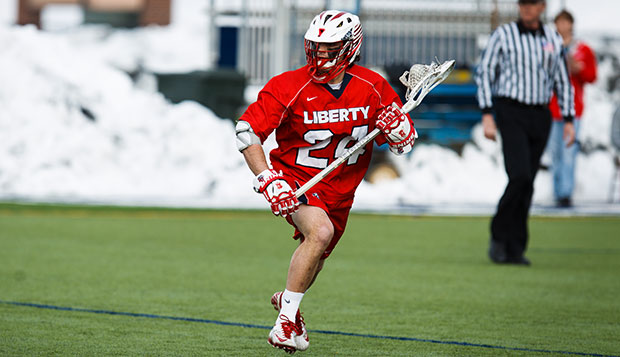 In its first of a three-game spring break trip out West, the Flames (3-1) rallied from a 7-4 deficit to start the fourth quarter by getting the last three of four goals from junior attack Brett Bernardo and the tying score from junior midfielder Bryce Mrakovich with 40 seconds left in regulation.

"We scored first and that was the last time we had the lead," Flames Head Coach Kyle McQuillan said. "The guys battled back and showed a lot of heart and were able to push it to overtime. We came out here to prove we could play the best teams in the country and we proved we could play with them."

But the Wildcats (6-1) netted the game-winner on a shot from the perimeter that got past Liberty senior goalie Ethan Kamholtz a minute and a half into overtime, dropping the Flames from the ranks of the unbeaten.

"Arizona did a fantastic job of getting ground balls and they were able to get possession and maintain it in overtime," McQuillan said. "They had some really good outside shooters and some guys with pretty quick sticks.

"Not taking anything away from Arizona, but we made a lot of mistakes," he added. "We played a very good game, but we made some mistakes and they took advantage of them."."

McQuillan said though the final score was a disappointment, there were a lot of positive things for Liberty to take from the contest.

"We learned a lot tonight," he said. "We found ourselves behind and had to dig ourselves out of a hole. We've just got to clean some things up, be a little more aware of our possession."

The Flames play next on Thursday at 5 p.m. (EST) at No. 7-ranked Grand Canyon in Phoenix, which dropped three spots after losing to BYU, which moved up three positions to No. 5. Liberty will conclude its road trip Friday at 10 p.m. (EST) at No. 2-ranked Arizona State in Tempe, Ariz.