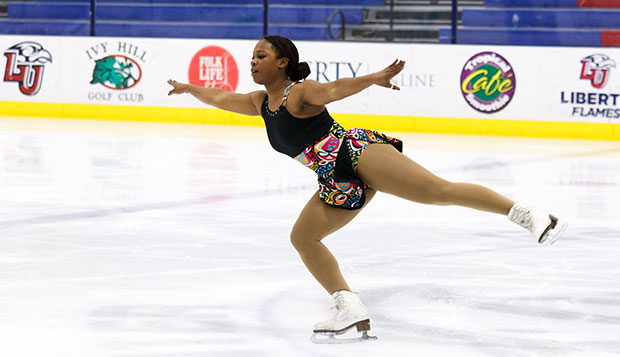 The Lady Flames had the opportunity to host the final Club Sports event at LaHaye before the arena's 10-month renovation starting March 15.

Though it didn't qualify for the April 10-12 U.S. Figure Skating Intercollegiate Nationals with a top-three team finish, Liberty did make history with its Intermediate Team Maneuvers squad, outscoring teams from Boston and Towson universities, among others.

"We were so excited," Lady Flames Head Coach Tatiana Payne said. "I did not expect that and all of the other teams were really happy for us as well because that's our first time ever getting a gold medal in intercollegiate competition. As the coach, I was so pleased to see the girls' hard work finally pay off."

Delaware, which ranked first in the Eastern Section going into this past weekend's competition, solidified its standing with a first-place team finish. The Blue Hens were followed by Boston, Dartmouth, Sacred Heart, Connecticut, and East Carolina University in the sectional event that featured 13 schools. Liberty placed eighth, ahead of Rutgers, Virginia, Penn State University, and the College of Charleston.

"Fantasia skated well," Payne said. "She had a really strong showing this weekend."

In the Team Maneuvers competition, in which teams were judged on a series of six individual maneuvers, Remonvil executed a back camel spin and a double toe loop.

"It was definitely thrilling and very rewarding," Remonvil said. "Individually, I did a lot of things I thought I couldn't think I could do, so I'm very excited about it."

Individually, Lady Flames junior Emily Boyles placed third out of eight skaters in Group A of the Preliminary freeskate before junior Laura Gordon finished fifth out of eight in Group B.

Liberty senior captain Kelly Pollock placed fifth out of eight skaters in Group B of Preliminary Solo Dance, Saturday's opening event, before taking sixth in Group B of the Senior free skating session on Sunday morning.

The Lady Flames, who competed in the first Eastern Sectional event Feb. 7-8 in Massachusetts, will travel to the third and final sectional competition March 21-22 hosted by Delaware at the Fred Rust Arena in Newark, Del.