Flames bounce Bobcats to set up showdown with Penn State 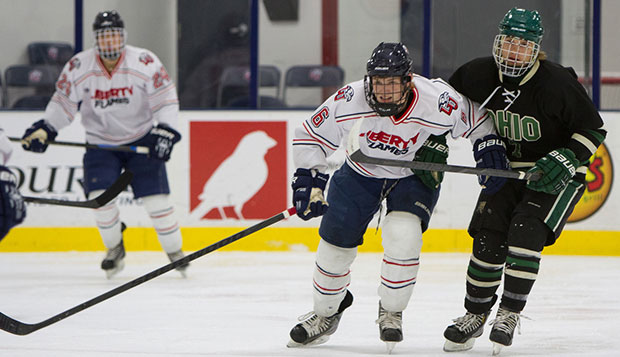 Liberty split its two-game series with Ohio on Oct. 4-5 at the LaHaye Ice Center but won Saturday's rubber match in the first round of the Southeast Regional playoffs.

All four top seeds in Saturday's ACHA Division II Southeast Region men's hockey tournament near Philadelphia advanced to Sunday's second round, including sixth-seeded Liberty University, which broke open a tie game late in the third period for a 4-2 triumph over No. 7 Ohio.

That guarantees one return qualifier for the March 20-24 ACHA DI National Championships in Salt Lake City — the winner of the 12:30 p.m. showdown between the Flames and third-seeded Penn State — and one first-time participant (No. 4 Toledo or No. 5 Rowan) will come out of the region after Sunday's second-round matchups.

Liberty, which split two games against Ohio at home last semester, outshot the Bobcats 53-42 on Saturday.

Kazmierczak netted the only goal of the first period with 29 seconds remaining, finishing a loose-puck rebound of a shot by sophomore forward Ryan Bray, who put Liberty (17-10-1) up 2-0 with 11:00 left in the second period with an unassisted score on a slapshot from the top of the circle on a three-on-two break.

But the Bobcats (19-9-4) battled back to even the contest with two goals in a two-minute span just four minutes later. The first came on a point-blank shot past Flames goalie Blair Bennett (40 saves) off a wraparound assist before Collin Gustafson netted the second on slapshot from the point by off an assist from fellow defenseman William Smith on a five-on-three power play.

The game remained tied at 2-2 for the next 17-plus minutes before Bray scored the game-winner by finishing a bouncing puck around the net off an assist from senior defenseman Clinton Nigh with 7:30 remaining in regulation.

"Blair (Bennett) played pretty solid all game and made a couple really big saves in the last five minutes when we were protecting a one-goal lead, including a point-blank shot from in the slot," Lowes said. "There could have been a lot more goals on both sides if both goalies hadn't played so well."

Liberty senior forward Johnny Cotton put the victory on ice with an empty-net goal in the closing seconds.

The win sends the Flames to Sunday afternoon's contest against the Nittany Lions, 5-0 winners over 10th-seeded Virginia Tech.

"They looked really solid today and dominated, so we're going to have to play a great game," Lowes said, comparing Penn State (25-2) to FGCU and Miami of Ohio, a team Liberty edged in the second round of last year's regionals at the LaHaye Ice Center. "We haven't faced them this year, but we know how strong Penn State is. They have a great power play and their top line is very dangerous."