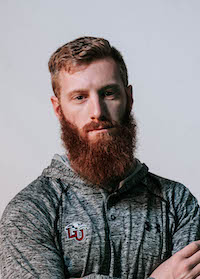 Zumpano is entering his 5th season as an Assistant Coach for the Flames. Coach Zumpano joined the coaching staff as the Defensive Coordinator in the fall of 2014 and has amassed a 38-22 record over 4 seasons. Zumpano has helped coach over 50+ games during his coaching career at LU. He graduated from Liberty in 2013 with a degree in Kinesiology: Exercise Science and a minor in Coaching. He went on to graduate with a Masters in Sport Management: Sport Administration from Liberty in the spring of 2016. Zumpano has also been an employee for Liberty Club Sports since 2014 and currently works as the Director of Business Operations.

A native of Clinton, Connecticut, Zumpano graduated from The Morgan School in 2007. After transferring to Liberty in 2009, he played an integral role in reviving the school's lacrosse program. Coach Zumpano is a graduate from the class of 2014, where he served as four-year captain for the program from 2011-2014. He helped lead Liberty to its first SELC Championship in 2013 and an MCLA National Tournament Final Four bid in Division 2 before moving up to the MCLA Division 1 level the following season. His honors included SELC All-Conference honors in 2011, 2012 and 2013, as well as an HM All-American nod in 2013. With a passion for coaching and Flames lacrosse, Zumpano’s desire is to lead Flames defensive players to reach their full potential in becoming leaders on campus, on the field, and ultimately in their communities.