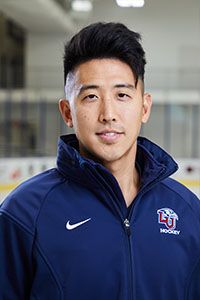 Jonathan was born in Toronto, Ontario, Canada. Jonathan began his Junior hockey days at the age of 16 splitting his time in the Great Lakes Junior C Hockey League as well as the Western Ontario Junior B Hockey League. In addition, Jonathan also played in the Northern Junior C Canadian Hockey League before finishing his career in the Provincial Junior A Tier II Hockey League for the Durham Fury.

Jonathan began his educational journey to Liberty University from 2007 to 2011 graduating with a B.S. in Exercise Science: Pre-Professional. Jonathan continued his education and graduated with a M.A.T. in Secondary Education in 2013. In 2017, Jonathan completed his Ed.S in Curriculum and Instruction and is currently pursuing a Ph.D. in Higher Education Administration.

As of the 2016-2017 season, Jonathan transitioned back to men’s DI ice hockey where he served and continues to serve as one of the bench coaches.