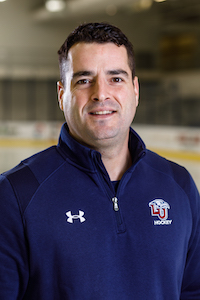 Coach Lowes has had great success in his first two seasons at the helm of the Women’s program.  Lowes has guided the Lady Flames to back-to-back ACHA National Championships starting with the 2018 title in Columbus, OH and most recently in March 2019 in Dallas, TX.  The back to back titles give the Lady Flames three National Championships overall in the past five years.

Lowes previously built the Men’s Division II team into a National power – including 4 nationals births and two national championship runner-up finishes in his final 4 seasons.  Coach Lowes and his wife Lisa have been married for 16 years and currently reside in the Lynchburg area.  They are the proud parents of two daughters, Peyton who is 8, and Shayne who is 6.