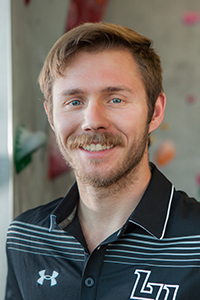 Coach Campbell graduated from Liberty University in 2013 with a Bachelor’s of Science in Biblical Studies. Currently, he works as a Student Service Supervisor for the university’s Student Accounts department. He has been married to his wife Larissa for two years and they are expecting their first child in February of 2017.

Campbell began climbing in 2010 during his sophomore year at Liberty University and has continued in the sport for the past six years. He grew up loving the outdoors and actively pursued activities such as backpacking, white water rafting, and skiing. However, climbing soon became his favorite sport to pursue, both inside and outside of the gym.

Coach Campbell has a great deal of experience in leadership positions and is excited to begin working with the club climbing team at Liberty University. His passion for the sport has given him high hopes for the team’s first season of competition. While his positive attitude and work ethic will enable him to encourage and work with the athletes, he is most excited about being able to impact student’s lives on a personal level.