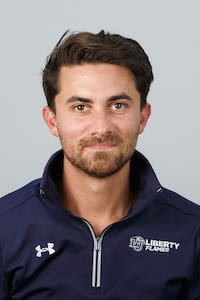 Brian Davidson is the head coach of the Paintball team at Liberty University. He attended Liberty University from 2007-2012 and participated on Liberty's paintball team each year. He was captain a captain on the team for three years. He enjoys providing players with knowledge that he has gained from playing paintball at the top level. Brian gives his athletes the opportunity to play to the best of their abilities and encourages them to strengthen their relationship with Jesus.

While at Liberty University, Brian received a B.S. in Electrical Engineering.

He has played on different teams in the PSP league ranging from Greensboro, NC, to Lakeland FL, to Chattanooga, TN. With these teams, he has claimed multiple 1st place finished, including one coming fom Division 1.

His Liberty team's standings each year for nationals include: