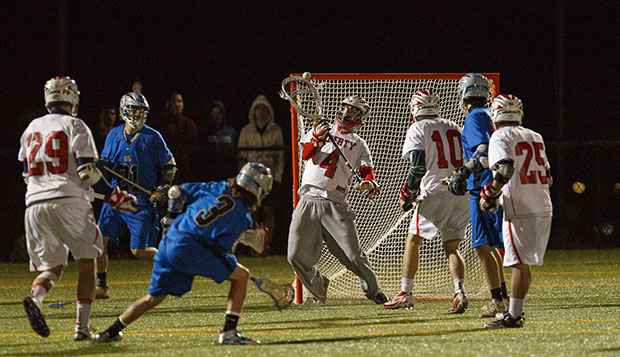 In its final season of competing at Division II before moving up to Division I of the Men's Collegiate Lacrosse Association, it took a Division I team transitioning to the NCAA Division I level to deal Liberty University its first defeat, Friday night at Richmond's Robins Stadium, home of the Spiders' football team.

"It was definitely a battle," Liberty head coach Kyle McQuillan said. "We came out swinging and actually took a 2-0 lead before we got ourselves in a hole and tried to work our way back out of it. In the end, we ran out of time. If there had been another quarter, we might have tied it back up, but you only get four."

Ryan Miller (three goals, two assists) and Kurt Tobias (three goals) each netted hat tricks for the Flames, who fired 42 shots on goal but came away with their lowest scoring output of the season. Bryce Mrakovich added two goals and two assists, Joe Gargiulo and Derek Haywood each scored once, and Chris Armstrong distributed two assists.

"We just couldn't find the net tonight," McQuillan said. "We were a little bit off in our shooting. We had lots of opportunities, we were just missing them. We hit a lot of pipes and couldn't find the back of the net as much as we needed to. We've got to learn to capitalize and take advantage."

The Spiders, who are now 6-5 overall but 3-1 and only a half game behind Virginia Tech for first place in the North West Region of Division I, got balanced scoring production, mostly from their perimeter shooters.

"(Goalie) Ethan Kamholtz had a great game with 16 saves, but we knew this was going to be his toughest test of the year," McQuillan said. "Richmond is definitely a team with offensive firepower that likes to take shots from outside."

Defensively, Liberty got a particularly strong game out of Tom Girani, a freshman from Smith Mountain Lake who started in place of fellow freshman Brandt Grauss, who was nursing a hamstring injury. Senior left-side midfielder Mike Zumpano also played well on the defensive end, picking up a team-high seven ground balls.

"Mike played a great game," McQuillan said. "He sparked some of the late transitional goals we had, which is something we weren't able to do until late. They did a good job in slowing us down and shutting that part of our game down."

For faceoffs, the Spiders had a specialist in sophomore Alec Douglass, who won 15 of 27 from Liberty freshman Charles Fianko

"Charles still put up a pretty good fight, but they definitely got the better of us in faceoffs tonight," McQuillan said. "We knew they were very dominant in that department."

Overall, McQuillan kept the Flames' first loss in perspective and used it to keep the team motivated.

"They're definitely a program on the rise this season, moving up to NCAA Division I," he said. "Making the transition to Division I, we wanted to add some teams from that level. It's tough for a team when you lose, but there's more of an opportunity to learn, so it may be a blessing in disguise.

"Victories are awesome and they're fun and they feel great, but it's hard to be critical after victories because you won the game," he added. "This gives us a piece of what they call humble pie, gives us something to work on and we'll pull as many positives out of this thing as we can. Our season is far from over and anything we can take to learn from, to add fuel to our fire is awesome."

The Flames return home to the Liberty Lacrosse Complex on Sunday at 3 p.m. for a Southeast Lacrosse Conference game against UNC Charlotte before finishing the regular season off with senior night next Friday against defending SELC champion Elon.

"At the end of the day, we're still 10-0 in divisional play, still in prime position to win our conference and make a strong run to win the (MCLA Division II) national championship," McQuillan said. "We got shot down tonight, but I think we're going to be able to get up stronger and learn from our mistakes."