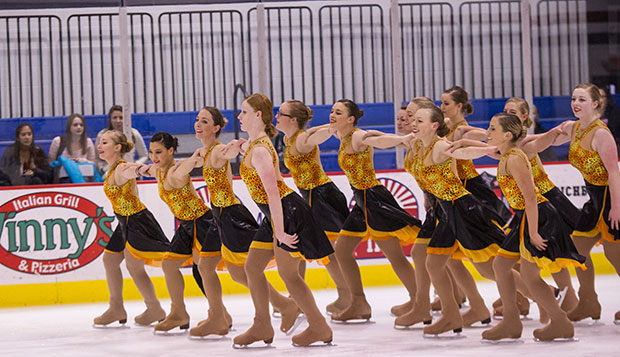 The top three teams, Boston, Maryland, and Boston College, had competed in the collegiate division last year, which is where LU Radiance would like to move up to by next fall.

"There was a lot more competition this year," Liberty figure skating and synchronized skating head coach Tatiana Payne said. "The teams were, overall, far better than they've ever been before. We watched some of the teams practice (on Friday) and knew what to expect. Some of them skated better today than they did in practice the day before and we didn't skate quite as well."

A 6.0 scoring system was used, with seven judges ranking the teams from first through 11th. Delaware and Princeton followed in fourth and fifth, respectively, and Catamount-Glades came in sixth, one-tenth of a point in front of Liberty in the judges' calculations.

Though LU Radiance performed last, it had to wake up at 4 a.m. to get dressed and prepare their makeup and hair for the 7 a.m. start to the open collegiate competition.

"They did pretty good for themselves, though they didn't skate their best," Payne said.

The team did receive style points, and plenty of compliments, on its program, which featured an African theme performed to musical selections ranging from the opening song in "The Lion King" to "Waka Waka" by Shakira.

"Our program was far more creative and the music was among the most interesting and exciting (in the competition)," Payne said.  "Everybody loved our choice of dress."

The team stayed in the Olympic Center to watch Saturday afternoon's adult figure skating finals as well as the collegiate division of the synchronized skating competition.

"They seemed to have a good time, and it was a good experience for them," Payne said.

Payne and LU Radiance will next work on putting together Liberty's annual "PraiseFest on Ice," a Christian-based skating show that involves both the synchro and figure skating teams as well as a couplearea skating clubs, in early April.