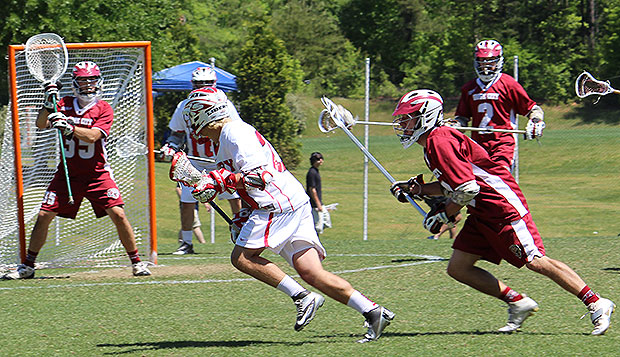 The Flames (18-1), who will move up to Division I next season, rallied for a second consecutive come-from-behind victory over a lower-seeded opponent, edging the 12th-seeded Wolverines (11-3).

Now, they must prepare for the ultimate challenge in Thursday's 2 p.m. semifinal, webcast live from Sirrine Stadium, where they will take on top-seeded, undefeated, defending national champion St. Thomas (Minn.), an 18-8 winner over U.S. Coast Guard on Tuesday. The Tommies (15-0) have played in the past four MCLA DII championship games, winning three, and have lost only five games over the past five seasons combined.

"It's going to be our toughest test of the season," Flames coach Kyle McQuillan said. "We go from being the favorite to a huge, huge underdog. You don't want to lose to a team you're supposed to beat, and now we have the opportunity to prove we belong among the best teams in the country. We're excited about the opportunity. We're not going to be intimidated."

As it did against 13th-seeded North Dakota State in Monday's first-round matchup, Liberty trailed by one goal at halftime and three in the second half before mounting its comeback.

"It's not obviously ideal, but the fact we've been able to battle out of those situations for some close wins creates confidence that we can be down but never out," McQuillan said.

In what turned out to be a duel between two pairs of freshmen, Flames' midfielder Bryce Mrakovich and attack Ryan Miller eventually gained the upper hand on the Wolverines' attack duo of David Hall and Daniel Casselli.

Hall scored all five of Grove City's first-half goals, three off assists from Casselli. After Mrakovich received a hitch-and-go feed from Chris Armstrong and rifled a shot into the upper right corner of the net to tie it at 5 less than two minutes into the second half, Hall assisted Casselli, who put the Wolverines back on top, and faceoff specialist Ryan Althausen in a man-up situation. Casselli then split two Liberty defenders for an unassisted score to make it 8-5 with less than five minutes left in the third quarter.

But the Flames got two of those goals back before period's end.

Liberty then scored the first three goals of the fourth quarter to claim a 10-8 lead with less than five minutes left. Armstrong started the scoring surge by skipping a long shot past Grove City goalie Chris Dymski off a quick transition from midfield.

Derek Haywood, who converted the tying goal in the final seconds of regulation and the winning goal in the first two minutes of overtime against North Dakota State, then gave the Flames their first lead since the first quarter with a spectacular run through the left crease, finishing into the upper-right netting with 5:38 to play.

Liberty long stick middie Charles Fianko, who was shut out in the first half before winning the first four faceoffs of the third quarter against Althausen, then returned possession to the Flames, who capitalized once more off a dazzling connection by their phenomenal freshmen. This time, Mrakovich spotted Miller cutting through the left crease where he fed him a short pass from the right side and Miller beat Dymski with a behind-the-back shot.

The Wolverines didn't waste any time in retaliating, with Althausen netting his second goal less than 10 seconds after winning the faceoff for the final score with 4:35 remaining in regulation. Liberty maintained possession for the majority of the next three minutes before Travis Briggs and Nathan Lowmaster stripped the ball from Grove City players twice behind the Flames' cage in the closing minute. Miller received a long outlet pass from senior long stick middie Michael Zumpano and Mrakovich ran out the final seconds after a Liberty timeout to preserve the win.

"We slowed things down tremendously and were confident in our defense's ability," McQuillan said of the final four and a half minutes. "I've got to give credit where credit is due — the defense really stepped up today."

Liberty outshot Grove City 37-33 for the game only after holding a 13-4 advantage in the fourth quarter. Sophomore goalie Ethan Kamholtz made 12 saves and held his opponent under 10 goals for the 14th time in 19 games. (Complete scoring stats are available on the mcla.us website.)

Freshmen defenders Tom Girani and Brandt Grauss rotated in and out and both played well before Grauss aggravated a hamstring injury, which will sideline him for the rest of the tournament.

Lowmaster and Zumpano played key roles in pushing the ball in transition and getting the ball back on attack and Travis Briggs led the Flames in ground-ball pickups.

All four top seeds advanced to the Final Four so the winner between Liberty and St. Thomas will take on Thursday's first semifinal winner between No. 2 Westminster and No. 3 St. John's (Minn.) in Saturday's  5 p.m. championship game at Sirrine Stadium.