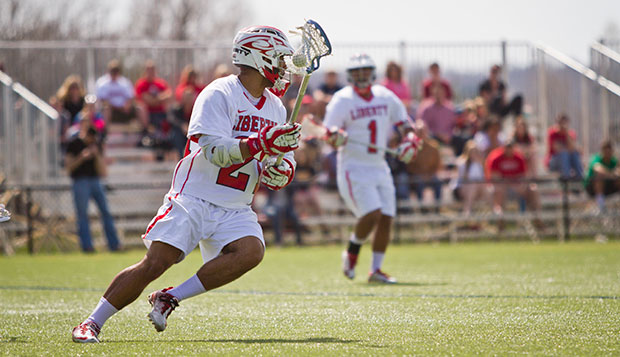 Liberty junior midfielder Derek Haywood scored the tying goal with eight seconds remaining in regulation before netting the game-winner a minute and a half into the overtime period to upend North Dakota State, 12-11.

Derek Haywood has been an unsung hero for Liberty University's men's lacrosse team throughout his career.

In Monday's first round of the Men's Collegiate Lacrosse Association Division II national tournament in Greenville, S.C., a thrilling 12-11 triumph over North Dakota State University, the junior midfielder shifted into the spotlight.

Haywood enabled the fourth-seeded Flames, making their first national tournament appearance, to escape 13th-seeded Bison's first-round upset bid, netting the tying goal with eight seconds left in regulation and the game-winner a minute and a half into sudden-death overtime.

"It was entertaining, to say the least," Liberty head coach Kyle McQuillan said, noting the Flames trailed for the majority of the game and were down by three goals with less than four minutes to go. "I feel for NCSU because that's an awful way to lose a game, but I'm proud of our guys. It was a really fun game to be a part of and the guys deserve all the credit in the world for battling back the way they did. They got some breaks and capitalized. We proved we've got some heart."

On the game-winner, Haywood finished a fast-break opportunity with a relentless charge on net seconds after Liberty goalie Ethan Kamholtz's save on the other end.

"Derek crashed into the cage, went to shoot the ball and his stick was checked and the ball went into the back of the net on a redirection," McQuillan said. "It wasn't the prettiest goal, but good things happen when you rush the cage aggressively."

He was immediately engulfed by Flames' teammates who stormed onto the field and piled on top of him in exuberant celebration.

For Liberty's fifth-leading scorer on the season, the two biggest goals of his career couldn't have come at a more opportune time.

"Derek's more of our quarterback in terms of setting things up," McQuillan said. "He has great vision and can find open guys and spark our offense. But one thing about Derek is when the game has been on the line, he has been clutch. He wants the ball in those situations. It's good to know if we do need a goal, we've got somebody we can turn to and he's proven he can get it."

The Flames (17-1) advance to face 12th-seeded Grove City, a 12-9 winner over fifth-seeded Concordia, in today's 10:30 a.m. quarterfinal on Field No. 3 of the Wenwood Soccer Complex, which will be webcast live. The winner of that game likely will face undefeated, defending national champion St. Thomas in Thursday's first Final Four game at 2 p.m.

For the Bison (7-6), making a third straight trip to nationals, five of their six losses came against teams ranked in the top four in the MCLA Division II poll — No. 1 St. Thomas, No. 2 Westminster, No. 3 St. John's (Minn., twice), and No. 4 Liberty.

"They've played good lacrosse all year, but haven't been able to get one of those signature wins," McQuillan said.

The Flames' top two scorers on the season, freshman Ryan Miller and Kurt Tobias, tallied goals near the end of the first quarter and the start of the second, respectively, to tie the game at 4.

Kamholtz then put Liberty on top 5-4 with the first goal of his career, taking the ball the length of the field before putting it in the Bison's cage.

He came up big in his own cage when the Flames needed him most, finishing with 10 saves.

"Defensively, we had some breakdowns and left him out to dry a couple times," McQuillan said. "Ethan played better and better as the game went on and was able to come up with a huge save in overtime, That's what kick-started, fueled our transition and ultimately won us the game."

Miller, who's third goal pulled Liberty within 11-10 with 2:00 to go, and fellow forward Joe Gargiulo each completed hat tricks to fuel the Flames' attack.