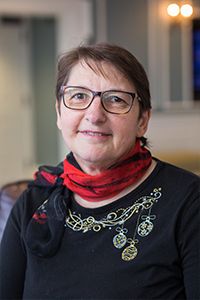 Assistant Professor of German and French

Professor Miller grew up bilingual in the Alsace region of France, right on the border with Germany and Switzerland, learning both French and German. After completing high school in France, she attended the Dolmetscherschule (School of Translation and Interpreting) in Zürich, Switzerland, where she received her Bachelor’s and Master’s Degree in Applied Linguistics (French, German, English).

Miller has since taught French and German at the University of Nebraska – Omaha and Brevard Community College in Cocoa, Florida. While her husband was stationed in Germany, she taught conversational German to military personnel at Neubrücke and Baumholder Army installations. She was also the sole proprietor of her own business, The Language Works, providing multilingual translation and interpretation services to individuals, private businesses and public institutions.

After moving to Maryland, Miller became a high-school teacher of French in Calvert County, and earned a Maryland Teacher Certification from the College of Notre Dame of Maryland to teach French at the secondary level.