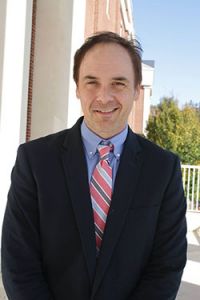 Dr. Michael A. Davis joined the faculty of Liberty University in July of 2005. His area of specialty is 20th century American history, with an emphasis on both the American presidency and American popular culture. He also has an outside field of interest in Ancient Mediterranean studies. Dr. Davis has taught at the college level since 1995, and possesses great passion not only for the discipline of history but also for students and learning.

His most recent publication is Politics as Usual: Thomas Dewey, Franklin Roosevelt, and the Wartime Presidential Campaign of 1944, published by Northern Illinois University Press in 2014. He is also the author of “Politics of the 1930s and the New Deal,” a historiographic essay in a Kent State University Press volume entitled Interpreting American History: The New Deal and the Great Depression (2014), and “The Legend of Bill Dark: Guerrilla Warfare, Oral History, and the Unmaking of an Arkansas Bushwhacker,” published in the Arkansas Historical Quarterly (Winter 1999). He also contributed an essay on Gerald Ford’s post-presidency to the Blackwell-Wiley volume, A Companion to Gerald R. Ford and Jimmy Carter. Dr. Davis is currently working on a book-length project on Elvis Presley and television.