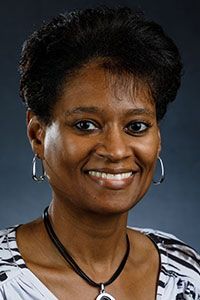 Having grown up as the daughter of a librarian, Ms. Simpson fell in love with reading and literary language at an early age. She graduated from Liberty University in 1995 with an undergraduate degree in English and a desire to participate in foreign missions in some way. She graduated from Liberty again in 1997 with a Master of Arts in Religion and Missions. She worked for World Help, a missions organization in nearby Forest, Va., from 1997 to 2000 while also teaching English for Liberty’s External Degree Program.

In August of 2000, she became the administrative assistant to the Executive Director of Liberty University Online. Ms. Simpson then began teaching residential English 100 courses as adjunct faculty in August of 2001 and became full-time faculty in August of 2002. She graduated from Longwood University in 2004 with a Master of Arts in English Literature and is now in the dissertation stage of earning her Ph.D. in Composition and TESL from Indiana University of Pennsylvania. In addition to teaching English writing courses online and on campus, she directs Liberty’s Online Writing Center and is an Assessment Coordinator for the Department of English.