Ted Kennedy: A friend of the family 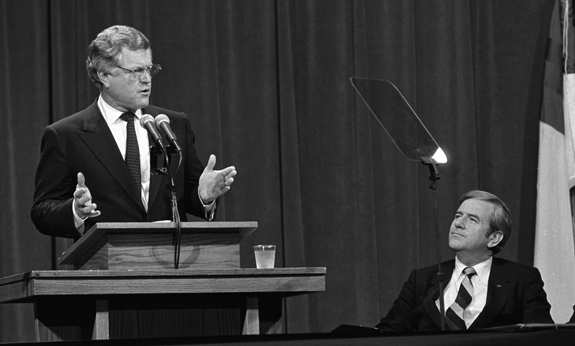 Sen. Ted Kennedy, a friend of Liberty University’s founder, the late Dr. Jerry Falwell, and his family, died late Tuesday at his home in Hyannis Port, Mass., after a long battle with brain cancer.

Kennedy, 77, had spoken at Liberty and conversed with Falwell, Sr. on many occasions.

Jerry Falwell, Jr. wrote about Kennedy’s relationship with his father in the July/August “Liberty Journal.” An excerpt is below.

One poignant reminder of lessons learned from those who came before occurred to me recently when it was announced that Sen. Edward M. Kennedy has a malignant brain tumor. Philosophically and politically, Kennedy and my father were diametrically opposed, but that did not prevent their friendship. My father invited Kennedy to speak at Liberty University on Oct. 3, 1983. I was in my third year at Liberty and remember the event well.

We were impressed with Kennedy as he and his family ate dinner at our family’s home. He was warm and personable and reminded me of Dad in many ways. When he spoke to Liberty University students, he was well received and, even though the students did not agree with much of what he said, they were polite and kind. He stayed in touch with my father after he left Lynchburg.
The next year, I applied for admission to the law school at the University of Virginia, where Kennedy had attended. He volunteered to write a letter of recommendation for me. I am sure the faculty was surprised to see a Kennedy recommending a Falwell, but I guess it helped because I was admitted. Later, when I was a student at the University of Virginia Law School, Kennedy invited our entire family to have dinner at his home in McLean, Va.

On another occasion, when my father was in south Florida, Kennedy asked him to come and pray with his mother who was nearly 100 years old and in failing health. Dad was honored to oblige the request and visit with Rose Kennedy.

Over the years our family encountered the senator less frequently, but I was struck by one particular act of kindness on his part just a few years ago. In 2005, when my father was hospitalized with severe pulmonary edema, one of the first letters he received was from Kennedy. The letter was heartfelt and encouraging, wishing my father a quick recovery. I am sure that if my father were alive today, he would be the first to send a similar letter of well wishes to Kennedy.

I hope that our generation can learn from the relationship between my father and Senator Kennedy. Both of these men understood that they could disagree without being disagreeable. They were both lightning rods for their respective causes, but they treated each other with civility and respect.