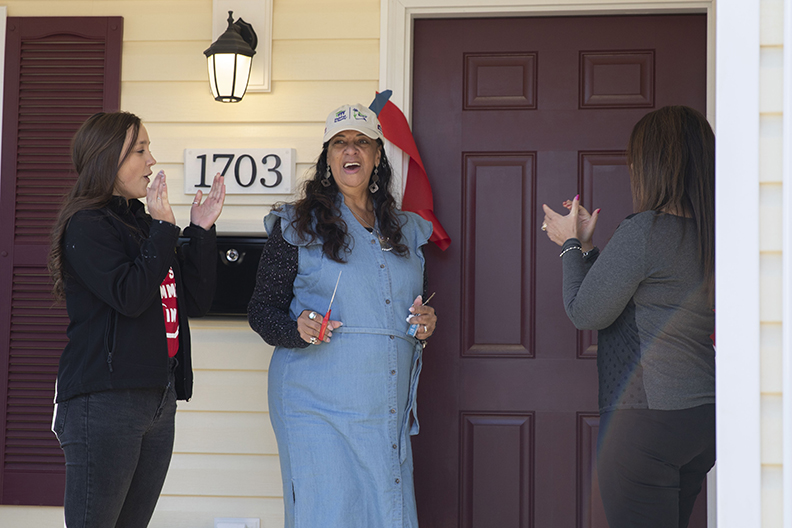 The Habitat for Humanity Club at Liberty University, in association with the Greater Lynchburg chapter, presented the keys for its third home construction to a worthy homeowner on Saturday.

When Irene Newsome, a great-grandmother and cancer survivor, stood on her new porch in front of many of those who made the project possible, including Liberty students, she shared her heartfelt appreciation for the home that she was able to purchase and the people who built it.

“I’m giving God all the honor, glory, and praise that I’m here today,” Newsome said. “The businesses who contributed, the volunteers who worked, and everyone else, they’re the best people I’ve ever met. God has placed some of the most amazing people in my life.” 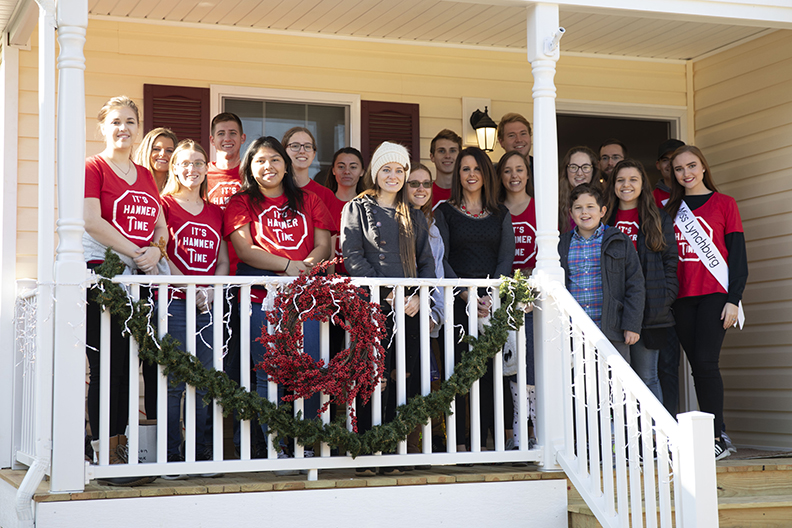 As part of the presentation, Newsome also received a quilt, painting, birdhouse, $50 ReStore gift card, American flag, and new Bible from which Psalm 84 was read in honor of the occasion. Newsome said that those involved have become her extended family in her mind, and she quipped that she would cook a Christmas dinner for her new  friends.

The team of 80 students and multiple community volunteers completed the house following successful fundraising and a matching State Farm grant, all of which once seemed improbable to faculty advisor Alison Pettit. 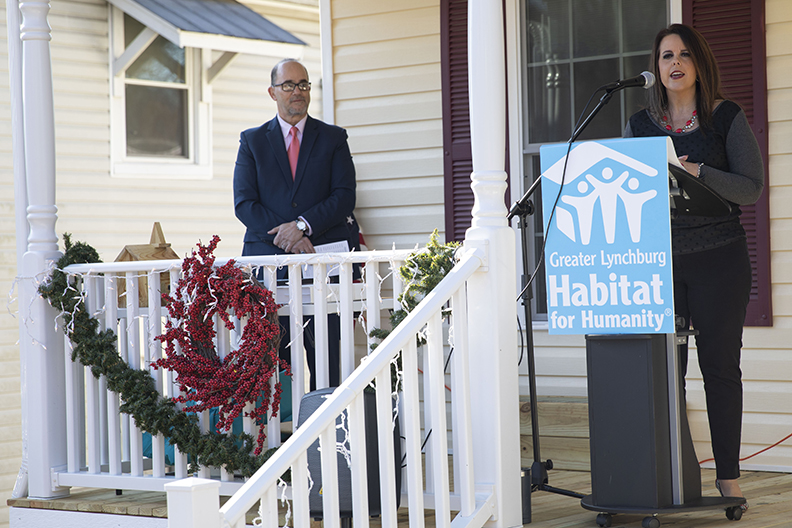 During the ceremony, Pettit recalled the early days of the club. She began the club in 2014, and the first interest meeting brought in only three students. Fundraising was at a minimum, but over time God opened doors. Sodexo, Liberty’s dining services provider, began to partner with the club by allowing them to work concessions for a percentage of the profits. The first house was completed in 2016.

“I cannot thank Sodexo enough for their partnership these past five years,” Pettit said. “We wouldn’t be here without them letting us do concessions for them.”

The club is comprised entirely of students and has served over 1,400 hours in the Lynchburg community during the Fall 2019 semester alone. Pettit said she is proud of the students who are willing to sacrifice their weekends and free time to serve others. 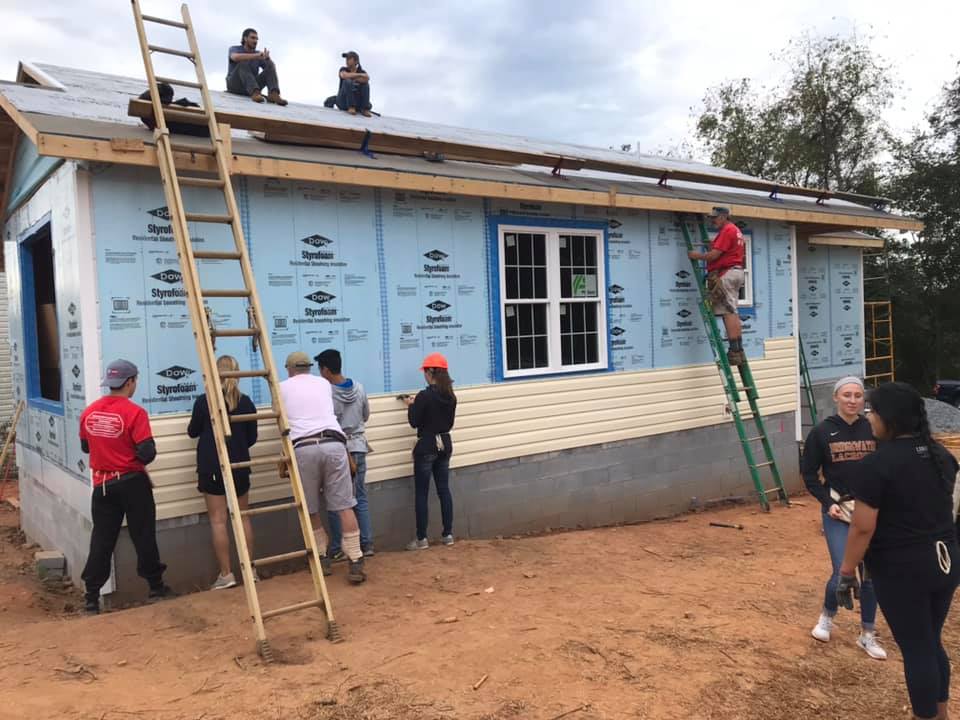 “The students often become close with the homeowners and are able to share their faith, and we pray every time before we start a build,” Pettit said. “I don’t think there is a better representation of God’s love than serving firsthand and helping like this.”

Club president Maddie Sumner, a junior, has been a member for all three of her years at Liberty, and she attested to its growth.

“When I was a freshman, they said we’d be lucky if we got to build the third house before graduation, and now the one we start next year will be the fourth house,” Sumner said. “These past couple of years have been incredible.”

Sumner described the construction sites of a club build as a place for more than swinging hammers and fulfilling a quota of work hours, and she said that even those who have minimal experience are welcome. 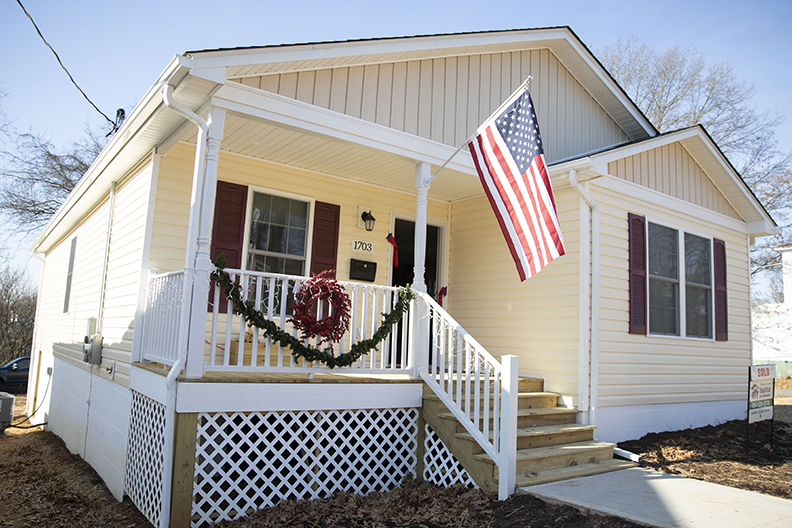 “You can see the passion that has grown inside each member of our group, and it’s absolutely incredible,” she said. “A lot of people are skeptical about going to the build because they haven’t even swung a hammer before, but this welcoming environment makes people feel comfortable and motivated to work.”

Earlier this fall, the club was chosen to receive a $20,000 Campus Chapter State Farm Matching Grant for the second year in a row. The only other school to have received the grant back-to-back was Clemson University. In order to receive the grant in whole, the club will need to match the $20,000 through fundraisers held over a nine-month period. Pettit announced that Sodexo will continue its five-year partnership, and Jersey Mike’s Subs’ Day of Caring and Liberty’s FACS Fashion Show have both named the club as their recipient of fundraisers next March. Construction on the club’s next home will start in the fall of 2020 or spring of 2021, following the completion of the fundraising efforts. 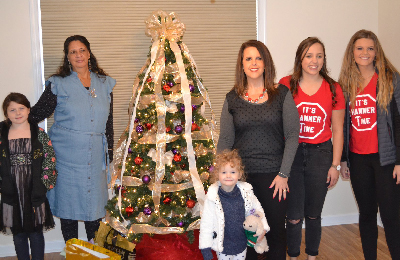 To close the ceremony, Pastor Mike Dodd from Tree of Life Ministries prayed over Irene, who has been a friend of his for over 35 years, and said that her house is blessed because she herself is blessed. Then Newsome invited her guests inside her new home, where the club had surprised her with a final touch — a fully decorated Christmas tree.

To get involved, contact Alison Pettit (adpettit@liberty.edu) or Maddie Sumner (mjsumner@liberty.edu). New members are welcome throughout the year.