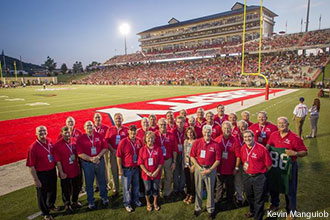 The pioneers of Liberty's football program returned to campus for the weekend of the Flames' first football home game of 2013 against Monmouth (Sept. 7) as Liberty Athletics celebrated 40 Years of Football by holding a reunion of its 1973 team.

Liberty's first football program posted a 3-3 record under the program's head coach Lee "Rock" Royer. Liberty, known as Lynchburg Baptist College at the time, won the last three games of its inaugural campaign, including the program's first-ever victory over Ferrum on Oct. 25 (29-7).

Twenty players, three coaches, and two administrators returned for the festive weekend, which began with a reunion dinner in the Donor Room of the Williams Football Operations Center on Sept. 6.