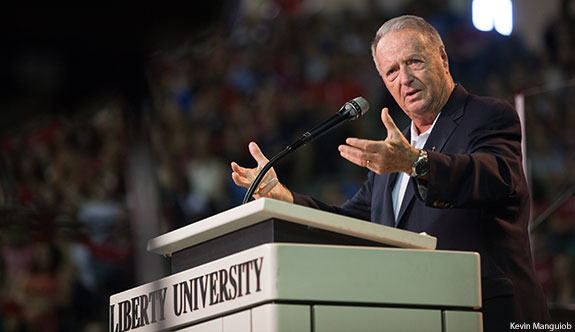 At Liberty University’s Convocation on Friday, college football coaching legend Bobby Bowden shared his story, imparting life wisdom to the students, laced with a healthy dose of wit and humor.

Bowden last spoke at Liberty in 2007 and said he is impressed by Liberty’s amazing growth, noting he has been following the university since it was founded in 1971. He toured campus facilities, including the state-of-the-art Williams Stadium, and met with Liberty Head Coach Turner Gill and other members of administration.

“Remember to honor God with your gifts,” Haney said, sharing his key to success. “He will do great and marvelous things in you. You will be the ones to impact and change the world for good. Allow God to be first. Talk to Him and let Him control your life. There is no cooler person than Jesus Christ.”

“His reputation is iconic; he is known as much, though, for his personal faith in Christ as he is for training young men out on the football field,” Falwell said. “Having coached young men in seven decades, he is the winningest coach in major college football history.”

Bowden led Florida State University to more than 300 victories, three national championships, and 12 Atlantic Coast Conference titles in his 34-year tenure. Under Bowden, the team finished in the top five in the country in 14 straight seasons and went to bowl games in 28 consecutive seasons.

Bowden shared how God worked in His life, noting the seeming providence of having received six coaching jobs — including the head coach position at West Virginia University before Florida State — without ever applying for one of them.

“Folks, that is God leading my life because I tried to serve Him … whatever mistakes I made He forgave me and led me,” Bowden said.

As a child Bowden was pulled out of school for a year due to illness. He was told by doctors he would likely not live to 40 years old. But he prayed to God for healing, promising Him that he would use his love for athletics to serve Him. He fully recovered and was able to play sports again.

“I can look back and see exactly how God put my life together,” he said. “You can’t tell that story yet, ’cause yours is ahead of you and you don’t know what is going to happen to you. But what I’m saying is if you put God first in your life … God will work miracles in your life if you let Him. God is alive.”

He told the students that his life is an example of what blessings can come to those who serve the Lord.

“All of you will eventually graduate and you will be out there working on your profession, and all I say is put God first, let Him lead you … if you’ll follow that, I think you will end up successful.”