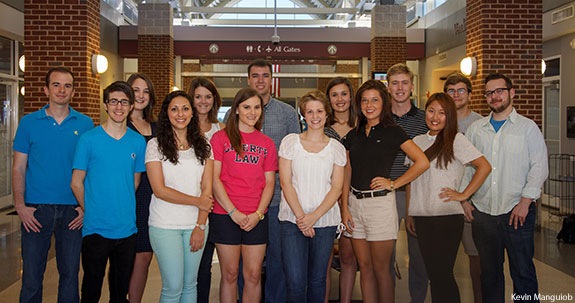 A group of 12 Liberty University students and a pair of chaperones depart from Lynchburg Regional Airport Wednesday morning to participate in Glenn Beck's Independence Day rally in Salt Lake City.

This Independence Day, 12 Liberty University students will share the historical significance of important artifacts in the Independence Through History museum, part of Glenn Beck’s “Man in the Moon” event July 4-6 in Salt Lake City.

Students will host the museum’s 12 thematically arranged stations featuring about 100 historical artifacts — an estimated $55 million value — collected and arranged to tell the story of America’s freedom through its choices.

The artifacts include the desk on which President Abraham Lincoln signed the Emancipation Proclamation, a lock of George Washington’s hair, and Edmund Burke’s prayer Bible. The tours are already sold out and a number of high-profile figures — including state senators, governors, and prominent historians — are among the expected guests.

“As a country we have always had to make decisions, not between democrat and republican but literally between good and evil,” said Joe Kerry, Glenn Beck Program chief of staff and president of Mercury One, the nonprofit presenting the event. “We are going to walk the (guests) through these choices that we have made as a country … we are blessed when we make those decisions that bring us closer to God, and when we don’t, we suffer the consequences.”

The Man in the Moon event is a three-day celebration of America’s freedom culminating with a special show — a never-before-seen storytelling spectacle utilizing live-action stunts and innovative film techniques. Leading up to the finale will be several seminars, conferences, speakers, and displays designed to enhance the experience.

Beck has become a strong supporter of Liberty over the years. He was the keynote speaker at Liberty’s 2010 Commencement and is a friend of Chancellor Jerry Falwell, Jr., who has appeared on Beck’s television show to discuss topics such as social justice and the role of religion in today’s society. Falwell was recently featured on Beck’s radio program after Falwell supported Cole Withrow, a high school senior who became the center of a gun control controversy.

While many institutions have fallen prey to political correctness, Liberty is committed to academic freedom and the fundamentals of faith. The university appreciates, respects, and promotes the founding principles of the U.S., including free enterprise and limited government.

Many prominent schools have fallen away from these ideals and as a result “history and our true heroes” are being lost, Kerry explained. Beck recognizes that Liberty is committed to teaching American history and encourages students to “think for themselves,” a reason he wanted Liberty students to participate in the event.

Falwell volunteered to pay for the students’ airfare, a gesture much appreciated by the nonprofit, which will use profits from the museum to acquire and preserve historical documents.

Montgomery Pace, who flew into Lynchburg from Tampa, Fla., to meet the other students, said she was honored to be selected and humbled to represent Liberty at a large national event. She said Liberty’s ideals are rooted in our nation’s history.

“We learn all viewpoints fully and fairly and have intelligent discussions about them … students in the School of Government sit around the ‘round table’ daily and have political discussions,” she said. “Liberty brings in excellent speakers every week from all spheres of society and careers from all over the world. It stands by its mission and beliefs and truly upholds the values it stands for.”