UPDATE - 6/24/2013: Liberty University’s team of Charity Holland, a School of Aeronautics instructor, and Jessica Dyer, a recent graduate, placed ninth out of 47 planes and fourth out of 13 college entries in the 37th annual All Women's Air Race Classic. They also earned the Fastest Piper award for being the first of the Piper Arrow planes to finish. 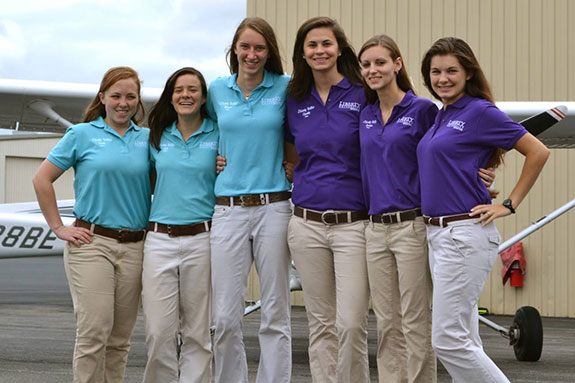 Two teams of female aviators representing Liberty University School of Aeronautics departed from Lynchburg Regional Airport on Monday en route to the annual Air Race Classic, a competition next week that will cover 2,460 miles from Washington to Arkansas.

“It’s intense flying,” she said. “You’re traveling the country with 45 other (pairs of) women in airplanes, so if you know anything about flying and traffic, people are everywhere.”

The race takes off on June 18 from Tri-Cities Airport in Pasco, Wash., before making its 10th and final landing June 21 at Drake Field Airport in Fayetteville, Ark. (Follow the Liberty Belles on their Facebook page.)

“Historically, aviation was male-dominated for many, many years,” said retired U.S. Air Force Brig. Gen. David Young, dean of Liberty’s SOA, who noted women now make up 15 percent of the school’s students. “We’ve been truly blessed with the quality of the ladies we’ve had in our program.”

Last year was the Liberty Belles’ first time entering the race, placing 27th and 28th out of 42 finishing teams.

“This race is just one factor in their development,” Young said. “But it’s also encouraging, because other young ladies who are interested in aviation say, ‘Oh, that’s something that I can do. I never dreamed that I could do that.’”

Participants are required to attend pre-race briefings that cover fuel planning, weather, fly-bys, and emergencies. Morris has prepared the Liberty Belles to deal with unexpected weather patterns and adjust their flight schedules accordingly.

“I think the biggest challenge is just making good decisions,” she said. “Every decision is a little bit of a risk. You might lose the opportunity to have good winds and have a better ground speed or you might come up against weather.”

Dyer said she is eager to put her training to the test.

“It’s a lot of thinking ahead, being prepared, thinking ‘OK, we’re going to wake up at the crack of dawn, we’re going to be out at the airport and ready.’ We have so many items we have to do and (the challenge will be) just splitting up the tasks evenly so everything gets done in the shortest amount of time possible,” she said.

Morris said this year’s teams have worked well together to streamline logistics and develop flight plans.

“They’re a great group,” she said. “They’re eager to learn. They have a lot of creative ideas and we’re just kind of open to anything that will make us go faster.”

The race is open to fixed-wing aircraft ranging from 145 to 570 horsepower, with a handicap system leveling the field.

The first plane to land in Fayetteville, Ark., is not necessarily the winner as total flight time is the determining factor. Pilots can take advantage of favorable winds and weather conditions to fly multiple stages on one day and fewer the next, but must land at their day’s destination by sunset each night.

Liberty University School of Aeronautics will have another chance to promote women in aviation when it hosts the last of this month’s three “Women Can Fly” events in Virginia on June 29 from 9 a.m. to 4 p.m. at its Freedom Aviation hangar at Lynchburg Regional Airport. The event is co-sponsored by Virginia’s Department of Aviation, Ninety-Nines, Inc. (an international organization of women pilots), Lynchburg Regional Airport, Freedom Aviation, and Liberty University.

“We’re encouraging young ladies, all the way from the age of 8 and up to come out,” Young said. “We’re going to be giving them flights, simulator rides, touring the tower, teaching about aircraft maintenance and all aspects of aviation.”

The event is free, but girls or women who wish to take a free ride, must register in advance at www.womencanfly.org.