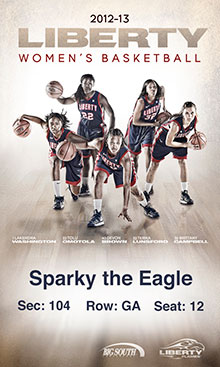 Liberty University has been named the winner of the University TicketReturn Season Ticket Card Design Contest for its 2012-13 Women’s Basketball pass card.

The original design was created by Rachel Dugan, a graphic designer in Liberty’s Marketing Department, and was used for the team’s promotional materials. Liberty designer Owen Baker assisted in formatting it for the ticket. The winning design used images produced by the Liberty University Photography Department.

The card allowed season-ticket holders easy entrance through the Vines Center gates for all home games. This was the third year Liberty’s Athletics Department distributed TicketReturn cards to hundreds of women’s basketball season-ticket holders, according to assistant director of ticket operations Joe Rixon.

As the winner, Liberty will receive a framed, commemorative picture showcasing the top designs as well as a catered lunch for staff compliments of TicketReturn.