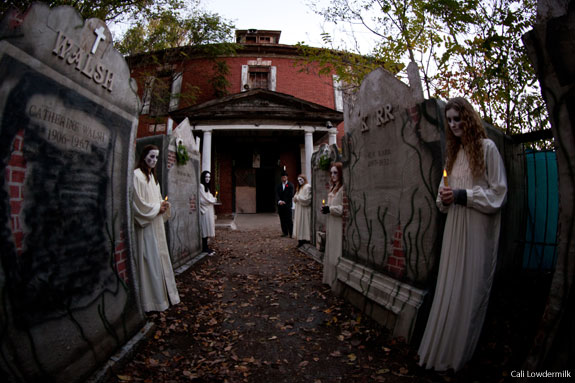 Scaremare is celebrating its 40th anniversary, and with additional trails and a second building added this year, it is certain to induce more screams than ever before.

Sponsored by Liberty University’s Center for Youth Ministries, Scaremare presents funhouse rooms and scenes of death, and ultimately confronts visitors with the question, “What happens after we die?”

At the end of the chilling experience, visitors are presented with an answer to this question —  a positive message that has transformed the lives of about 26,000 over the past two decades.

The original “House of Death” opened just one year after Liberty was founded and has shared its grim but life-changing message to more than 300,000 people from several states.

Scaremare is open to the public during the weekends of Oct. 11-13, 18-20, and 25-27, from dusk-11 p.m. It has been held at four different locations, including a mansion in Amherst County and an old hospital building in downtown Lynchburg. It presently operates at 2300 Carroll Ave, Lynchburg (the City Stadium exit, off of U.S. 29 North).

Individual tickets may be purchased at the gate, while groups of 15 or more can secure a special rate, but must pre-register online or by phone at (434) 582-7328, at least 24 hours in advance. For those looking to avoid long lines, Line Slasher tickets can pre-purchased for groups of at least 25 and guarantee entry into Scaremare within 30 minutes of a scheduled appointment. Every Thursday night is college and military I.D. night and tickets are $3 with a valid student or military I.D.