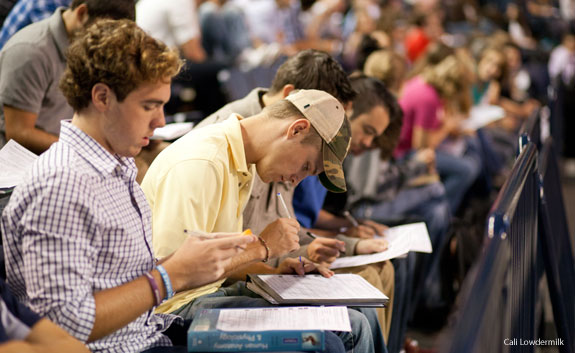 During Friday’s Convocation at Liberty University, Chancellor and President Jerry Falwell, Jr. encouraged the student body to exercise their right to vote and gave them a chance to register — on the spot.

The university has been collecting forms since the beginning of the semester. With Friday’s drive, about 2,500 registration forms have been collected so far. Many of those students registered to vote for the first time.

Falwell explained that as Christians, there is a responsibility to be a good citizen and that Liberty is committed to helping students do that.

In 2008 the university began an initiative, which has become tradition, to encourage students on a large scale to register to vote locally. Since then, nearly 4,000 new students have been registered to vote each year.

Falwell said students have a vested interest in governmental policies, which directly affect the cost of their education and the quality of their life while in Lynchburg, and their votes are being heard.

“Our relationship with the local community now is better than it ever has been,” he said. “We got our own polling place here on campus; the city built a pedestrian bridge to cross Wards Road, they are looking at other ways to make it better for you as a student to live here in Lynchburg.”

In March, students voted for the first time at Liberty’s own voting precinct in the Vines Center.

Falwell read a letter he received, signed by former Speaker Nancy Pelosi and 187 democratic members of the U.S. House of Representatives, asking the nation’s colleges and universities to take a more active role in educating students about the electoral process.

“I don't agree with Nancy Pelosi very often on anything, but on this one issue, she's right,” he said.

Instructions for voter registration were explained step-by-step on the large screens in the Vines Center and Liberty’s dean of students, Keith Anderson, led the students through the process. Members of Student Leadership handed out and collected the forms.

Senior Brody Barrett, who registered to vote for the first time on Friday, said it is great to attend a university that encourages its students to exercise their right to vote.

“They don’t strong-arm you into voting for one person, but really do encourage you to vote properly,” he said. “I feel it is my Christian duty to make sure we have the right leaders. The Bible says that we have to follow the leaders that God has put in place, but it makes it a lot easier when they line up with the heart of God.”